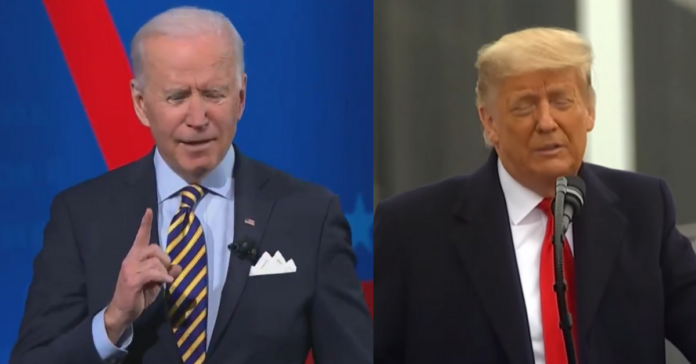 If you have been watching the media for the last few years what you are seeing now was entirely predictable. They made Trump and his team absolute villains who were wrong on everything. Basically oppose for the sake of opposing.

Most people knew if Biden got in office certain Trump programs and policies would all of a sudden not be as disastrous as the media led us to believe. They would even continue –  with different media coverage of course.

And the real good ideas Biden and the Dems would try to take credit for, and while most expected a compliant media to help them do this, it was refreshing to see a reporter call them out yesterday.

The issue is the gas pipeline from Russia to Germany – the best way to hold Putin to account for his various misdeeds would be to scuttle this pipeline. Something Trump pushed hard for four years. It would be a cash cow for him but more importantly, it would make Europe even more dependent on Russia’s fuel so blocking it reduces Putin’s power. It is quite simple really – if Trump and Putin were buddies Trump would never have tried to block this deal.

When a Biden spokesman tried to take credit for multiple companies pulling out of the pipeline deal threatening to end it for good,  AP reporter Matt Lee said not so fast and called them out. As he should.

Look, you will see this pattern repeat over the next four years – another one to watch for is the border and those kids in cages. Right now we have an issue there that may require putting kids, if only to give them a place to sleep, back in those same facilities the media crucified Trump for using. But you can bet the media will cover it differently under Biden.

An Associated Press reporter slammed Biden State Department spokesman Ned Price during a heated exchange on Monday for allegedly trying to take credit for work that was done by the Trump administration.

“And I think that demonstrates that our strategy, including the legislative strategy, the strategy that, of course, Congress has been behind, has been working to good effect,” Price said in reference to recent news involving a Russia-backed pipeline, Nord Stream 2. “We’ll continue to work closely with Germany, we’ll continue to work closely with our other allies and partners in Europe to uphold Europe’s own stated energy and security goals.”

“Don’t you think it’s bit disingenuous to claim credit for the 18 companies winding down?” AP reporter Matt Lee fired back. “All of this work was done in the previous administration, and you guys have only been … in office for a month. Right? Are you telling me that in the last four weeks, these 18 companies all of a sudden decide to say, ‘Oh my God! We better not do anything with Nord Stream 2.’”

“All of that, you guys are taking credit for stuff that the previous administration did!” Lee continued. “No?”