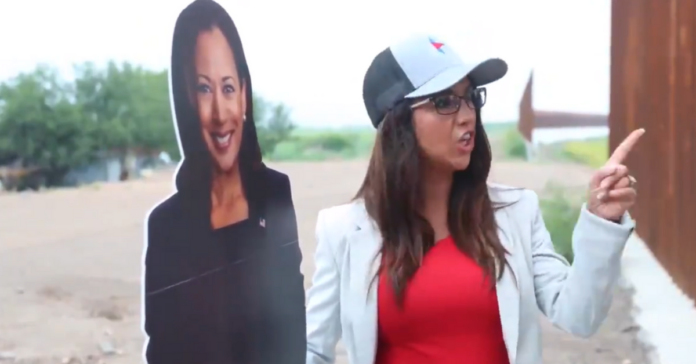 Colorado Republican Rep. Lauren Boebert publicly called out Vice President Kamala Harris saying she has abdicated her duty at the border. Boebert brought a cutout of Harris, who has not visited the southern border since President Joe Biden named her as his point person on the border, to the border to make her point.

Boebert shared a video of Kamala’s cutout at the border. She said in the video you can see below: “You can’t just hear about what’s happening, you have to come down here to see for yourself to really understand the devastating reality at our southern border. Illegal aliens crossing the border…sex offenders crossing the border…drug trafficking, gun smuggling, human smuggling” are “all up.

“You know what’s not up at the Southern border? Respect for law and order, funding for our border control. More than 70 days ago, Biden named cackling Kamala as border czar, but she hasn’t done a single thing to protect the American people.

“She hasn’t even been down here to see the border, or the tens of thousands of children, wrapped in aluminum foil.

“Now, Kamala, I want you to stand here and look at what you’ve done.

“Kamala, you’ve not been to the border. I brought a cardboard cutout of you down there, which frankly has more substance than the real thing, because you‘ve abdicated your duty,” she said.

Nearly a million illegal immigrants have been apprehended by United States Customs and Border Protection since October 1, 2020, and more than 170,000 were captured last month, according to new statistics from CBP, obtained by Axios.

The numbers are already the highest since 2006, with still four months left to go in the agency’s fiscal year, the outlet reported Tuesday.

“The number of migrants illegally crossing the U.S.-Mexico border this fiscal year is already the most since 2006 — with four months left to go,” Axios noted. “Why it matters: The numbers quantify a lingering problem.

Numbers have plateaued for the last several months right around 170,000, with around 6,000 illegal immigrants apprehended daily, according to CNN.

Perhaps more importantly, the CBP’s data seems to show that, while most immigrants are coming to the United States-Mexico border from Mexico and Central America, an increasing number of migrants are traveling to the border “from more distant nations such as Ecuador, Venezuela, Cuba, and Haiti,” undermining Vice President Kamala Harris’ strategy for addressing the “root causes” of illegal immigration by focusing exclusively on Guatemala, El Salvador, and Honduras.

…The majority of migrants still come from the “Northern Triangle,” but as Axios notes, it appears that migrants from Ecuador now make up a significant number of those captured — enough that the CBP’s interdiction strategy could shift focus.

“In just five sectors, more than 32,000 Ecuadorians have been encountered at the U.S.-Mexico border this fiscal year.

I went to the southern border to see what’s up, but I didn’t go alone… pic.twitter.com/m66fet7mUT

But President Trump was egotistical and a narcissist, right? Riiiiight…… https://t.co/DOfT6SfLL5