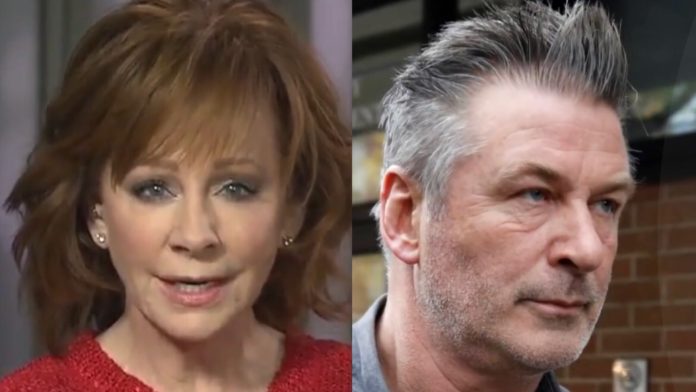 Alec Baldwin gets to mock Trump in character on Saturday Night Live but that is the job – to play act that he is Trump. It is sometimes funny and other times just boring but that is a role he is playing.

When he steps out of that role to bash Trump as he often does, he is just another celebrity know-nothing who should take a lesson in grace and class from Reba McEntire.

From The Hill: Reba McEntire says, as a country music star, weighing in on politics just isn’t in her job description.

“That’s not my job,” McEntire told ITK recently when asked about her practice of keeping her lips sealed on political issues.

It’s a rare stance among Hollywood entertainers, who have increasingly weighed in on the happenings in Washington, D.C., amid the Trump era.

“That’s why it’s so great to live here in the United States of America,” the “Fancy” singer replied when asked about performers who do get political.

McEntire’s comments echoed remarks she made in an interview on “The View” last year.

“They have paid their hard-earned money to come in there and fill a seat,” the Grammy Award winner said at the time of concertgoers. “I am there to entertain them,” McEntire insisted. “To take their worries away from them, so when they walk out, they can kind of have a lift in their step and just go, ‘Oh that was such a great break from all the problems I have to deal with during daily life.’”

Earlier today Alec Baldwin proved his needs a straightjacket when he went on an absurd anti-Trump and anti-USA rant.

From Breitbart: Actor and faux-President Donald Trump Alec Baldwin called the president a “curse” for the “sins” of America Sunday, saying that it is time to “exorcise” him from society.

“Trump is a curse, brought down on us as punishment 4 our sins. The slaughter of Native Americans, slavery, Japanese internment, Vietnam. Every hateful, misogynistic, racist notion, intertwined w our better nature, Trump embodies those. He is us. Now we can face it + exorcise it,” Alec Baldwin said.

Baldwin’s rant not only fails to mention that the United States has done a great deal to right these historical wrongs, he also doesn’t mention that most of these tragedies took place under Democrats.

The Saturday Night Live star preceded this statement with another social media post, in which he called for all Americans to rally behind Trump’s eventual successor.

“Remember that once Trump is gone, by whatever means, + is replaced by a competent/duly elected successor, it will be necessary 4 all in this country 2 offer their support 2 that man/woman. Regardless of party. The period of healing for us will be long + will require our best.”