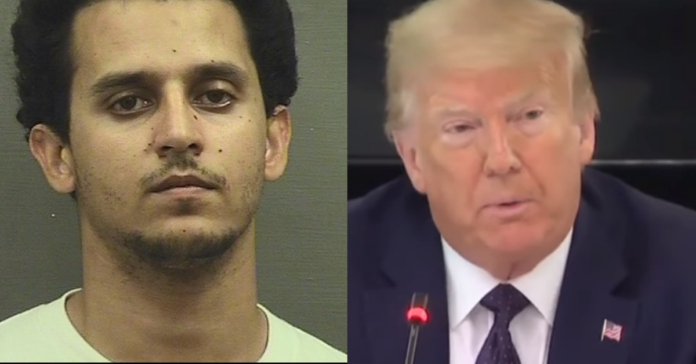 Police in Virginia have confirmed an unspeakable and totally preventable tragedy that took place in that state due to errors in judgment from another Dem administration.

A rape suspect who was released from jail over the crisis fears – against the wishes of everyone including the victim and her lawyers and the prosecutor – killed the woman who had accused him of raping and strangling her.

Ibrahim E. Bouaichi was indicted last year for rape, strangulation and abduction. He was jailed without bond but the judge ordered him out and sadly this tragedy happened.

The cops did find him and gave chase to this felon but Bouaichi shot himself before he could be captured. He is in bad condition but the last reports say he is still alive.

Circuit Court Judge Nolan Dawkins released Bouaichi on the condition that he only leave his Maryland home to meet with his lawyers or pretrial services officials.

Authorities said that federal marshals and Alexandria police spotted and pursued Bouaichi in Prince George’s County on Wednesday. He crashed his vehicle and apparently shot himself, authorities said.

Judge Dawkins retired in June. He did not respond to The Washington Post’s request for comment. Judges are often prohibited from commenting on pending cases.

Bouaichi’s attorneys, Manuel Leiva and Frank Salvato said in a statement that they were “certainly saddened by the tragedy both families have suffered here.”

The lawyers said they “were looking forward to trial. Unfortunately, the pandemic continued the trial date by several months and we didn’t get the chance to put forth our case.”

Police said the woman was a native of Venezuela and did not have family in this country. The Washington Post reported that very little information about her was available. The Associated Press does not identify persons who may have been sexually assaulted.

A Virginia man who was accused of raping a woman in October but released from jail over concerns surrounding COVID-19, has shot dead his accuser.

Alexandria police say Ibrahim E. Bouaichi, 33, fatally gunned down Karla Dominguez outside her apartment on July 29. The Venezuelan native was found dead outside her home with multiple gunshot wounds at around 6.20am.

Bouaichi had been in jail since October after Dominguez accused him of raping her, but he was released in April on bail, amid fears he could contract coroanvirus.

He shot his accuser just a few months later.

Police issued a video news release asking for the public’s help finding him after the attack, calling him ‘armed and dangerous,’ the Washington Post reports.