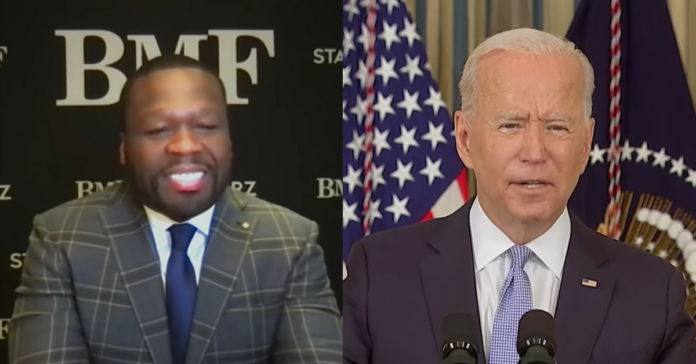 For every action there is an equal and opposite reaction, a lesson Joe Biden and the Dems are learning the hard way from a rap legend. 50 Cent, Curtis James Jackson III, went on MSNBC to warn Biden and the Dems over their tax plan saying if President Biden’s proposed tax hike passes he will move to Texas.

50 Cent said: “I didn’t realize I’d be paying 62% of my income to the IRS. When you tell an individual that you’re not gonna keep 62% of your earnings, because you live in this area?

“So, that does change a lot. New York City will change dramatically. Like, they are going to end up moving to different territories.

I’m going to Texas. I’ve got my cowboy hat, everything. Everything is bigger in Texas. Really beautiful people, nice people.

“All of Silicon Valley is now in Austin, Texas.

“So you’ll start to see people moving from these places to new places that make sense for them to hold on to what they’re earning, not to have it just taken from them by the government,” 50 Cent said.

Biden’s $3.5 trillion plan would bump the tax rate up to 39.6% on households earning more than $400,000. But New York state has incredibly high taxes too.

And the Dems can expect more people to make the same decision. No one likes to get gouged by the state.

50 Cent may be saved by the incompetence of the Dem Party however. Despite having full control of the government, they don’t have the votes to pass Biden’s plan.

Biden on Monday acknowledged the uncertain fate of his legislative agenda.

The House took a step forward on the reconciliation bill on Saturday, when the House Budget Committee voted to advance it.

But one Democratic lawmaker, Rep. Scott Peters (Calif.), joined Republicans in voting against moving the bill out of the budget committee, saying he was concerned the party was rushing to craft the social safety net package. Peters pointed to concerns he had about some of the spending levels in the legislation and said he had “other objections to the bill that have not been resolved but could be if given more time.”

Peters was also one of three House Democrats, along with Reps. Kurt Schrader (Ore.) and Kathleen Rice (N.Y.), who voted in the House Energy and Commerce Committee against a portion of the bill that would allow the Health and Human Services secretary to negotiate lower drug prices.

Rep. Stephanie Murphy (D-Fla.) also voted against all of the House Ways and Means Committee’s portions of the bill, saying in a statement earlier this month that the measure includes “spending and tax provisions that give me pause.”