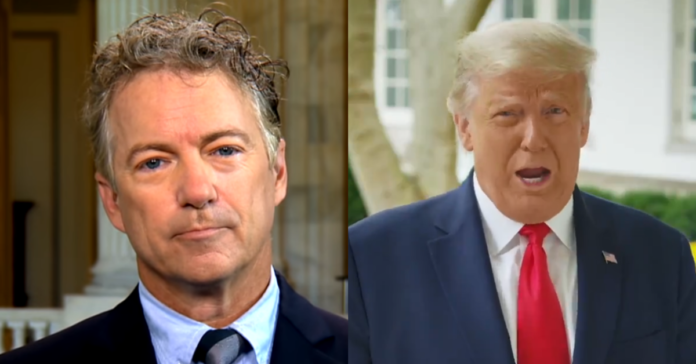 Rand Paul put the Senate on notice yesterday when he called for a procedural vote to determine the constitutionality of impeaching Trump after he left office.

Most experts say the Dems have the right to do this and will prevail if it ever goes to court, but Paul was not trying to win the vote to stop the trial.

He wanted GOP Senators on record and while some have said their vote to declare the trial unconstitutional is not tied to how they will vote in the actual trial Paul said it does.

In fact, after 45 GOP Senators voted that this is unconstitutional, Paul said it shows impeachment is “dead on arrival” in the Senate.

“If you voted that it was unconstitutional, how in the world would you ever vote to convict somebody for this?” Paul said. “This vote indicates it’s over. The trial is all over.”

Immediately before the vote, senators were sworn in for the trial, which is set to formally begin on Feb. 8.

The House impeached Trump earlier this month on one charge of inciting the insurrection at the Capitol on Jan. 6, when pro-Trump rioters stormed the building in a rampage that left five people dead.

While Paul said the vote shows that the House’s impeachment case is “dead on arrival” in the Senate, it is possible that some senators judge the House’s case differently on its merits, especially as new information about the Jan. 6 insurrection continues to be revealed.

Two-thirds of the Senate, or 67 senators, must vote for conviction in order for Trump to face punishments including being barred from holding federal office in the future.

Collins (R-Maine), who voted against Paul’s motion, agreed that the vote was indicative of the final vote on conviction.

“Do the math,” she said. “I think that it’s extraordinarily unlikely the president will be convicted.”

…Indeed, some of the 45 GOP senators who declared the trial unconstitutional said they would still weigh the evidence the House managers present independent of their vote on Tuesday, meaning that more than just five Republicans could be in play for conviction. Still, Tuesday’s vote strongly suggests that the House managers will fall well short of the two-thirds threshold.

“It emphasizes the importance of framing the evidence in a powerful way, and the trial team may want to evaluate whether witnesses will be called in effect to recall what Trump failed to do when he watched the assault in real time,” Sen. Richard Blumenthal (D-Conn.) said, referencing the ongoing debate among Democrats over whether to drag out the trial by allowing the House managers and Trump’s defense team to seek witness testimony.