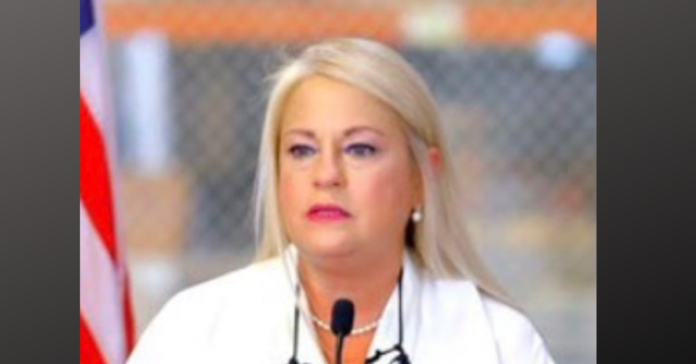 Former Puerto Rico Governor Wanda Vázquez was arrested Thursday on corruption charges multiple media organizations are reporting. A spokesperson for the Department of Justice confirmed her arrest to Bloomberg and said a press conference would be held this morning at 11 a.m. to discuss the arrest.

Two other unidentified people were arrested along with her. Vazquez lost her bid to be governor for a second term in 2020.

“Today, we see once again, that no one is above the law in Puerto Rico,” Gov. Pedro Pierluisi said in a statement. “We all have to be united against this social evil, and under my administration there is zero tolerance for corruption.”

According to The Washington Times:

“Vázquez was sworn in as governor in August 2019 after former Gov. Ricardo Rosselló stepped down following massive protests. She served until 2021, after losing the primaries of the pro-statehood New Progressive Party to now Gov. Pedro Pierluisi.

“Vázquez previously served as the island’s justice secretary and a district attorney for more than 30 years.

“She became governor after Puerto Rico’s Supreme Court ruled that the swearing in of Pierluisi – who was secretary of state in 2019 – as governor was unconstitutional. Vázquez at the time said she was not interested in running for office and would only finish the nearly two years left in Rosselló’s term.”

The Department of Justice made other arrests in an unrelated corrupotion case in Puerto Rico yesterday s well.

Mario Villegas-Vargas, 42, pleaded guilty today in Puerto Rico to engaging in a bribery scheme for paying kickbacks and bribes in exchange for being awarded municipal contracts that benefited his asphalt and paving company.

Beginning in or around June 2017, Villegas-Vargas and Individual B, co-owners of an asphalt and paving company, conspired to pay bribes and kickbacks to Félix Delgado-Montalvo, the former mayor of Cataño.

The purpose of these payments was to help ensure that their company would be awarded and continue to be awarded municipal contracts as opportunities arose in Cataño.

Together, Villegas-Vargas and Individual B paid more than $95,000.00 in kickback payments to Delgado when he was the mayor of Cataño in exchange for asphalt removal and concrete paving contracts in the municipality.

Villegas-Vargas pleaded guilty to one count of conspiracy to engage in a bribery scheme.  He faces a maximum penalty of five years in prison.

A federal district court judge will determine any sentence after considering the U.S. Sentencing Guidelines and other statutory factors.

The investigation was conducted by the FBI’s San Juan Field Office.

This case is part of the Justice Department’s ongoing efforts to combat public corruption by municipal officials in Puerto Rico.