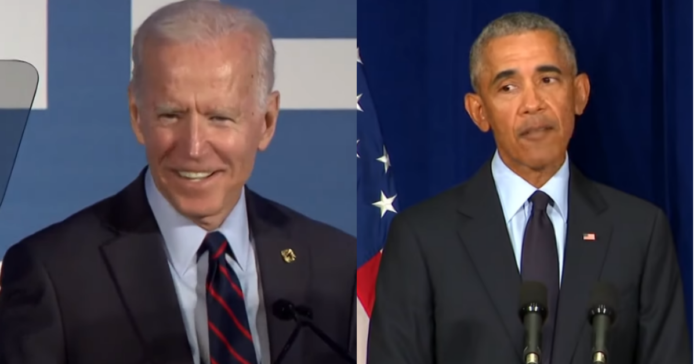 The Democrats are the gang who couldn’t shoot straight. They take extreme positions that expose them as hypocrites and then double down in acts of political tone-deafness.

Now, and this may be a political hit by one of Biden’s opponents, but to trash Biden and Obama for enforcing our laws is political suicide.

Barack Obama did face a crisis at the border, Obama did deal with a mass influx of migrant families and unaccompanied minors, and Obama did what he thought was best.

Trying to paint Trump as evil for doing similar stuff as Obama was always a dumb move and always bound to backfire, but we didn’t know how dumb until now.

From The Huffington Post: After an hour and a half of protesting in the building’s lobby using megaphones and signs, Philadelphia police arrested six activists from the group. When police arrived, undocumented families left the building to avoid being arrested and potentially sent into ICE custody. The protest continues in front of the building, but so far, no one from Biden’s campaign has responded to the group.

PREVIOUSLY: A group of families whose loved ones were among the roughly 3 million people deported under the Obama administration will hold a sit-in at Joe Biden’s campaign headquarters in Philadelphia on Wednesday, saying they’ll refuse to leave until they receive an apology from the former vice president.

The group of roughly 40 families and activists, organized by New Jersey-based immigrant rights group Movimiento Cosecha, plan to ask Biden’s 2020 presidential campaign to commit to a progressive immigration platform and acknowledge the pain caused by deportations under President Barack Obama.

Obama set a record for deportations, although he narrowed his focus later in his presidency to removing convicted criminals, recent border-crossers and people previously removed from the country. (A change in how removals were counted also accounts for some of the record.)

Although Obama also pressed for immigration reform and took steps to broaden protections for some immigrants, activists have criticized his administration for its deportation figures and expansion of detention, including for families.

“We can’t ignore the fact he was complacent to Obama’s vicious deportation machine,” said Catalina Santiago, the media coordinator at Movimiento Cosecha. “He is shamelessly ignoring the countless families he destroyed.”