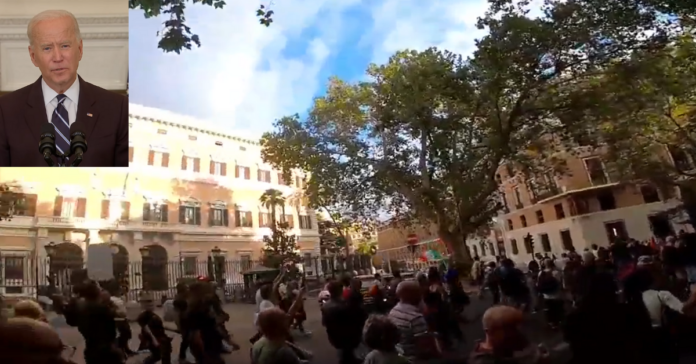 President Joe Biden has had a rough few months. He is dealing with multiple crises, mostly of his own making, and has offered no workable solutions.

His agenda is stalled by more than Dem infighting, the gang who can’t shoot straight is just now realizing that no one knows what is in the bills they are trying to ram through meaning the left has already lost the messaging war.

Worse, what is leaking out is horrifying, like the IRS getting the ability to snoop on bank transactions over $600. They say this is to stop billionaires from cheating on their taxes but the $600 threshold to start snooping shows them to be full of it.

Billionaires spend $600 for lunch so the Dems are playing with political fire here if this proposal makes it into the final bill. They may very well never win an election again if they pass it.

But it is not just America that has had it with the bumbling antics of Joe Biden and Kamala Harris.

Chants of F*ck Joe Biden could be heard at a massive protest in Rome, Italy last week as they have been heard across college football stadiums in the US.

Pelosi, who was in Rome for a meeting with foreign leaders, was attending Mass in the city at St. Patrick’s Church. Outside the church, chaos was erupting as thousands of Italians took to the streets over Italy’s new requirement for workers to show proof of a COVID-19 vaccine in the form of a “green pass.”

Just minutes into the service, Pelosi and her husband were reportedly removed from the church by government officials concerned about her safety, according to a representative from Pelosi’s office.

At the heart of protesters’ complaints is the “green pass” mandate — required documentation that details whether a person has been fully vaccinated, tested negative or has recently recovered from the virus. Starting Oct. 15, any worker who doesn’t show a vaccine certificate to their employer will be suspended without pay for up to five days.

It’s considered one of the strictest COVID-19 mandates in the world. Italy has already made this pass a requirement to eat indoors at restaurants or visit museums and gyms.

???? Protesters in Rome chant "Fuck Joe Biden" as they march past the American Embassy ?? pic.twitter.com/mxAkastFtW