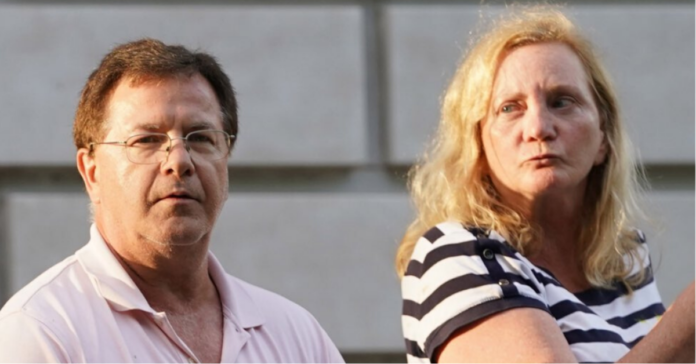 A St Louis prosecutor just charged the St. Louis couple that went viral in a video as they stood guard outside there home as protesters marched to the mayor’s house.

Circuit Attorney Kim Gardner charged the couple with felony unlawful use of a weapon for pulling guns at a protest near their mansion.

The Governor has said he would issue a pardon or in some way come to the aid of the couple if Gardner followed through on her threat to issue charges.

St. Louis’ top prosecutor told The Associated Press on Monday that she is charging a husband and wife with felony unlawful use of a weapon for displaying guns during a racial injustice protest outside their mansion.

Circuit Attorney Kim Gardner announced the charges against Mark and Patricia McCloskey, who are both personal injury attorneys in their 60s. They also face a misdemeanor charge of fourth-degree assault.

Gardner said in an interview with the AP ahead of more broadly announcing the charges that the McCloskeys’ actions risked creating a violent situation during an otherwise nonviolent protest.

“It is illegal to wave weapons in a threatening manner — that is unlawful in the city of St. Louis,” Gardner said.

Gardner is recommending a diversion program such as community service rather than jail time if the McCloskeys are convicted. Typically, class E felonies could result in up to four years in prison.

Supporters of the McCloskeys said they were legally defending their $1.15 million home. Photos emerged as memes on both sides of the gun debate.

Several Republican leaders have condemned Gardner’s investigation, including President Donald Trump, Missouri Gov. Mike Parson and Sen. Josh Hawley, who has urged Attorney General William Barr to undertake a civil rights investigation of Gardner. Parson said in a radio interview Friday that he would likely pardon the couple if they were charged and convicted.

Gardner said Trump, Parson and others are attacking her to distract from “their failed approach to the COVID-19 pandemic” and other issues.

St. Louis, like many cities across the country, has seen demonstrations in the weeks since George Floyd’s death in Minneapolis, and the McCloskeys’ home was initially incidental to the demonstration on June 28. Several hundred people were marching to the home of Democratic Mayor Lyda Krewson, a few blocks from the McCloskeys’ home. Krewson had angered activists by reading on Facebook Live the names and addresses of some who had called for defunding police.

ST. LOUIS (AP) — Prosecutor charges St. Louis couple with felony unlawful use of a weapon for pulling guns at protest near their mansion.