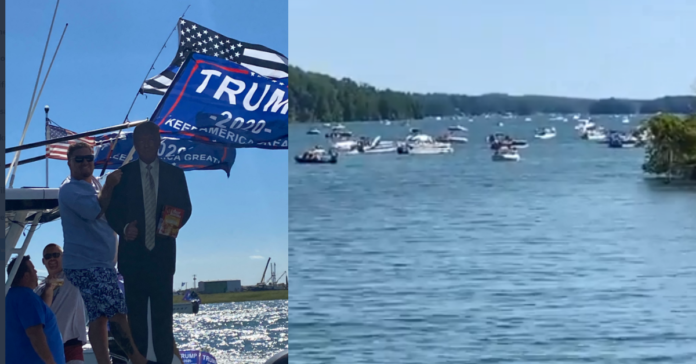 As the presidential race tightens and the Trump boater phenomena continue to grow. Every weekend there are multiple pro-Trump boat parades across this country.

Many of them are in blue states which has to make Joe Biden nervous. Yesterday saw another massive showing in Georgia with an estimated 4,000 boaters showing up to support Trump.

“What a great way to show support for our first responders and the leadership of this great nation. Let’s come together as Brothers and Sisters and celebrate these very freedoms.

Come out and join us on September 6th, at 10:30 on Lanier for the Great American Boat Parade. We have spent the past weeks organizing this great event down to the last detail.

We have our staging area, route and most importantly our rules and regulations for safety.

We have planned a route free if pinch points and obstacles on Lanier so every boat in the parade will be free from hazards.

We have organized a grid that places vessels of the same length together for the upmost of safety.”

“Organizers of the parade previously said they only expected about 700 boats,” she tweeted.

Organizers of the parade previously said they only expected about 700 boats.