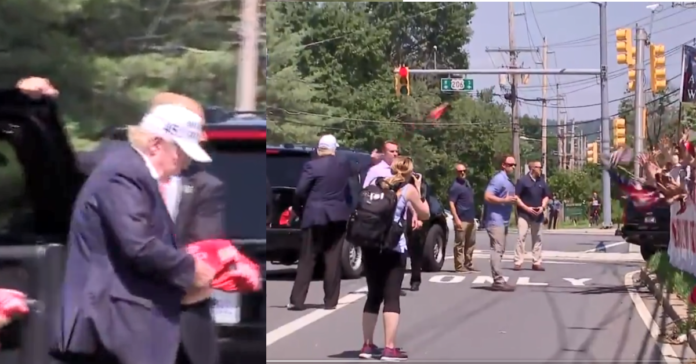 President Trump stopped the show otherwise known as his traveling motorcade Sunday to surprise some of his supporters.

President Trump stopped the motorcade and got out of his armored car called the beast and greeted his supporters pumping his fist as they cheered him on.

He also tossed some red Trump hats to his supporters who were waving American flags and cheering in the heat.

Supporters can be heard in the video below chanting “Four more years!” as President Trump worked the crowd before getting back in and taking off.

President Trump stopped to greet about 50 supporters at an intersection near his golf course in New Jersey Sunday — and tossed out red “Keep America Great” hats to the crowd.

The supporters gathered in the more than 90 degree heat for Trump’s scheduled departure to Washington hours later. They stood behind a banner that said “Thank You Mr. President for Making America Great!!!”

Many of the supporters had brought their own Make America Great Again hats, American flags and pro-Trump paraphernalia to the location in Bedminster, N.J.

Reporters in the motorcade heard Trump, who wore a suit and white “Make America Great Again” hat, shout “thank you” to the supporters.

White House personnel director John McEntee carried hats that Trump tossed into the crowd, according to a pool report.

MOMENTS AGO: President Trump tosses red 'MAGA' hats to a crowd of supporters in New Jersey. He is socially distanced from the group. pic.twitter.com/T6UfzOskeS

Maxine Waters Puts Biden On Notice In Bad Sign For Dems: “It is unconscionable, I meant it was bad, and it shocked me”