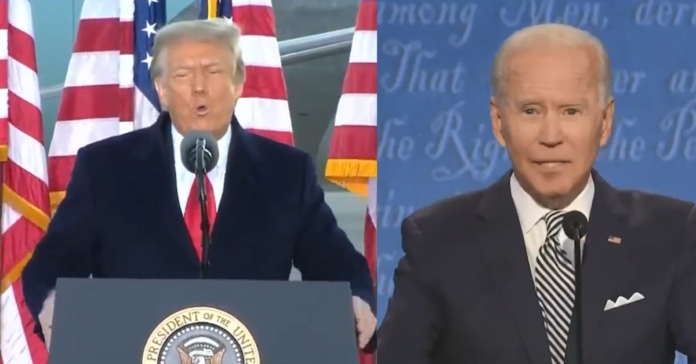 President Trump left a note for incoming President Joe Biden before leaving the White House for the last time Fox News has confirmed.

Fox reported Trump left the note for Joe Biden is in the Resolute Desk in the Oval Office. A White House spokesman Judd Deere confirmed the story although he would not reveal the contents. It will probably leak.

“There will be very tough times, made even more difficult by criticism you may not think is fair,” George H.W. Bush wrote to Clinton. “I’m not a very good one to give advice; but just don’t let the critics discourage you or push you off course.”

Trump refused to participate in any of the symbolic passing-of-the-torch traditions surrounding the peaceful transition of power, including inviting the Joe and Jill Biden to the White House for a get-to-know-you visit.

He did follow at least one tradition: The White House said Trump left behind a note for Biden. A Trump spokesman, Judd Deere, declined to say what Trump wrote or characterize the sentiment in the note, citing privacy for communication between presidents.

Members of Trump’s family gathered for the send-off on the military base along with the president’s loyalists, who chanted “We love you!” “Thank you, Trump” and “U.S.A.” Four Army cannons fired a 21-gun salute.

Speaking without notes, Trump said his presidency was an “incredible four years.” He told the crowd that he and first lady Melania Trump loved them and praised his family for its hard work, saying they could have chosen to have an easier life.

“It’s been something very special. We’ve accomplished a lot,” Trump said, citing the installation of conservative judges, creation of the space force, development of coronavirus vaccines and management of a robust pre-pandemic economy. “I hope they don’t raise your taxes, but if they do, I told you so,” he said of the incoming Biden administration.

He acknowledged that his was not a “regular administration” and told his backers that he would be returning in some form. He said the Trump campaign had worked so hard: “We’ve left it all on the field,” he said.

Without mention’s Biden’s name, Trump wished the new administration great luck and success, which he said would made easier because he had laid “a foundation.”

Nancy Pelosi Called Trump ‘Fat’ And ‘Crazy’ In Leaked Phone Call: “Is there anybody in charge at the White House who was doing anything...