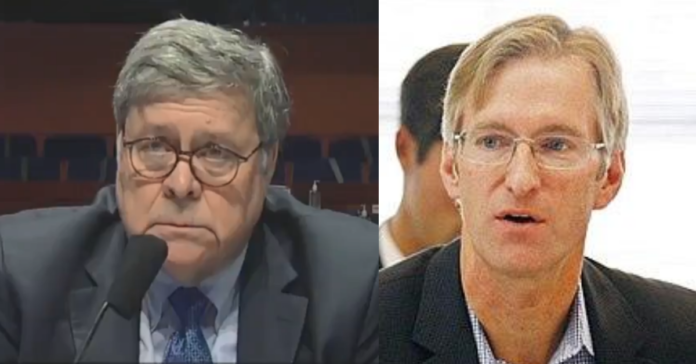 The city of Portland, Ore. Just crossed the line with their feud with Bill Barr and President Trump. They are now fining the federal government $500 for every 15 minutes it maintains unpermitted fencing outside of the federal courthouse.

They are in Portland to protect that courthouse after the Mayor fell asleep at the switch. City Commissioner Chloe Eudaly said in a statement that the fencing is obstructing the street outside of the courthouse and that as of Monday the federal government owed Portland $192,000.

She wrote,” I want to update you on our federal occupation, explain the steps that we have taken as a city, and share what our state legislature and federal delegation are doing to address this unconstitutional federal aggression against our city.

At a time when tensions were starting to decrease on our streets, Trump sent federal agents from two of the most politicized and controversial agencies—Customs and Border Patrol and the Department of Homeland Security—without Congressional authorization or notification, or local elected officials’ consent, into our city. While we work to counteract their presence, we face an uphill battle to do so in a process designed to usurp not just our local authority, but the authority of our federal representatives. As your elected representatives, we are doing everything we can. Our recourse may be limited, but we’re not giving up the fight.

Last Wednesday, I introduced two resolutions that were passed unanimously by City Council. One to stop the Portland Police Bureau from cooperating with the federal occupiers, and another to affirm the rights of members of the press and legal observers. On Thursday, I directed the Portland Bureau of Transportation (PBOT) to enforce on the federal occupiers for erecting a fence in our public right of way. PBOT filed a cease and desist demand on behalf of the City—we have not received a response. We are assessing the maximum fine of $500 for every 15 minutes the fence obstructs our street, and we are investigating other legal remedies available to us. Typically, we would send a maintenance crew or contractor to remove such an obstruction, but I will not send workers into harm’s way. Yes, I am afraid to direct workers to do their job and enforce our laws against the federal government—I hope that gives everyone reading this pause. As of yesterday, the federal government owes us $192,000 and counting. We intend to collect.

On Monday, despite demands from elected representatives across our region and our state and multiple lawsuits, the Trump administration announced they were sending additional federal agents to our city.

Mayor Ted Wheeler and Commissioner Jo Ann Hardesty, who are in charge of our public safety bureaus, called for a meeting with DHS leadership on the ground in Portland to discuss a “ceasefire and the removal of heightened federal forces from Portland.” They await a response.

In the Oregon State Legislature, our representatives are advocating for a tear gas ban, munitions limitations, and legislation to require officers to prominently display their names and ID numbers in the upcoming special session. Our federal delegation has pushed for DOJ and DHS Inspectors General to investigate Trump’s lawless actions in Portland—they are also working to defund this action in Congress.

Congressman Earl Blumenauer has demanded the resignation of Acting DHS Secretary Chad Wolf, stating, “Any person who oversees the kidnapping of protesters and the violent occupation of American cities has no place in our government.” I couldn’t agree more. We’ll be closely monitoring state and federal action and providing support wherever we can.

I know how challenging this is for Portlanders. I am committed to doing everything in my power to end this federal occupation and move forward with our community’s reckoning with racial injustice and our efforts to transform our approach to policing and public safety. Each and every one of you has a constitutional right to exercise your freedom of speech and to peacefully assemble.

The actions of a few should not negate these rights, and the response of law enforcement should be proportional to the infractions. Indiscriminately tear-gassing and firing impact munitions at thousands of peaceful protesters is not a proportionate response.”

Yes, I am afraid to direct workers to do their job and enforce our laws against the federal government—I hope that gives everyone reading this pause.

As of yesterday, the federal government owes us $192,000 and counting. We intend to collect.