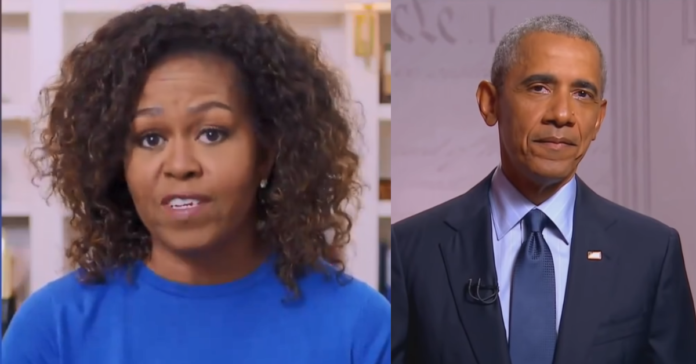 Amanda Gorman became the youngest inaugural poet in U.S. history to speak at a presidential inauguration when she gave an amazing performance of a poem she recently wrote titled “The Hill We Climb.”

She met Oprah and went on the talk shows to promote her works where she revealed some behind the scenes action at Biden’s inauguration.

She said Michelle was “yelling” at Barack because he was not social distancing and was hugging everyone, “I remember Michelle Obama, like, being close, and she kind of kept yelling at Barack, like, ‘Stop hugging people. Stop getting close to people.'”

On Tuesday, the inaugural poet, who inspired the world with her spoken word performance of “The Hill We Climb” at President Joe Biden’s inauguration, told Ellen DeGeneres on “The Ellen DeGeneres Show” about her experience sitting next to former President Barack Obama and Michelle Obama.

“I remember Michelle Obama, like, being close,” the 22-year-old said. “And she kind of kept yelling at Barack, like, ‘Stop hugging people. Stop getting close to people.'”

“And then when I was done, she kind of like pushed him out the way and gave me the just the biggest, warmest Michelle Obama hug.”

Gorman, who gained “millions and millions of followers in under 48 hours,” went on to reveal how she met the Obamas before her life-changing performance.

“I have met Michelle a few times before,” she told DeGeneres. “Not Barack. And whenever I meet Michelle I hope that she forgets meeting me, because I just want a do-over. I just want a clean slate. Like, I just want to do it right this time. But she always remembers and she’s always great.”

So, what is a hug from the former first lady like? Well, Gorman hilariously recalled, “When I hug her, I’m so short. My forehead is, like, in her belly button.”

“She’s awesome. You can always – she’s so down to Earth, as you know. You can be yourself around her,” DeGeneres said. “And there’s no do-over I’m sure.”