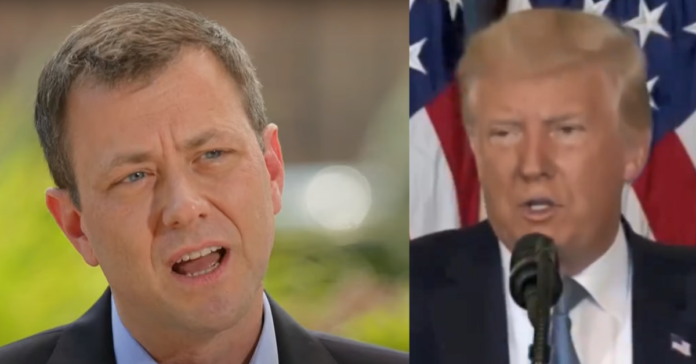 Former FBI agent Peter Strzok who destroyed his career and his reputation with his disgraceful behavior is now trying to salvage what is left.

How can a man who fell so far do that? Trash Trump of course and if you are going to trash Trump there is no better place to do it than MSNBC.

Strzok actually accused President Trump of being a threat to national security during an interview with reporter Hallie Jackson.

MSNBC’s Jackson asked, “So do you think the president is a national security threat?”

Jackson asked, “Do you believe the Russians still have hidden leverage over the president?”

“I think when you look at President Trump and the efforts he’s taken to fighting tooth and nail to prevent, for instance, the release of his tax records, there is something there he doesn’t want out.”

And there you have it – Trump is a threat to our security and all we have to do is look at his taxes and they will explain the plot in great detail – that is what they want you to believe.

This is a new shiny object they want to use to put Trump on the defensive. And remember – New York State passed a law that says Congress can ask for Trump’s taxes and they will give the sate returns which are very similar.

So why haven’t they got them? Pelosi could get Trump’s taxes tomorrow if she told New York to give them up. So why not? Because this way they can say Trump is hiding something and insinuate nefarious dealings.

As to the illegal and disgraceful abuses of the FISA process on his watch he said:

“I don’t think at all that it’s anything improper. You get people who are overworked, who make mistakes — and don’t get me wrong, inexcusable mistakes,” Strzok