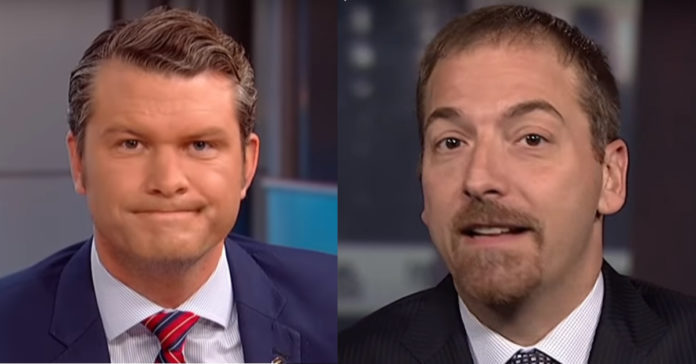 Pete Hegseth came out swinging and defended Trump supporters from Chuck Todd and the arrogance of the media elite.

Todd went on a tirade about Trump voters and called them gullible, basically saying they did not know what they were doing when they elected him and continue to stay in the dark.

The media is still trying to figure out how Trump won and it is shocking they continue to complicate the very simple, like a bunch of overpaid consultants.

From Fox News:Todd, the anchor of “Meet The Press,” said at a journalists conference in Washington that he suffered a “shock to [my] system” in “just how gullible a big chunk of the country was to” Donald Trump’s candidacy.

“[I] assumed people were discerning it out and knew the BS from the non-BS,” Todd said of Trump’s bid for the White House.

Hegseth said on “Fox & Friends” that Todd was effectively “calling them dumb.”

Gary Abernathy, a freelance reporter and former publisher of the Hillsboro Times-Gazette in Ohio, said Todd’s remarks were just another example of “the elite press” failing to understand Trump voters.

Abernathy said he is not necessarily a Trump supporter, but felt the need to stand up for Trump voters in the face of slights coming from people like Todd and former presidential candidate Hillary Clinton — who said the Republican’s supporters belong in a “basket of deplorables.”

From The Washington Times: Prominent journalists gathered this week to discuss why President Trump sits in the White House and came to the following conclusion: “Gullible” voters and “unfair” coverage — toward Democrat Hillary Clinton — are to blame.

They told host Kara Swisher that Mr. Trump’s campaign tricked the former secretary of state into responding to non-issues while stupid voters took care of the rest on Election Day.

“I knew the gaslighting was out there,” Mr. Todd told the panel Dec. 5 in reference to Mr. Trump’s psychological prowess. “I knew it was every day. But I think there was part of me in my head assumed people were discerning it out, knew the BS from the non-BS.

So, I think what my sort of shock to the system was just sort of how gullible a big chunk of the country was to this and gullible because maybe they want to be gullible.”