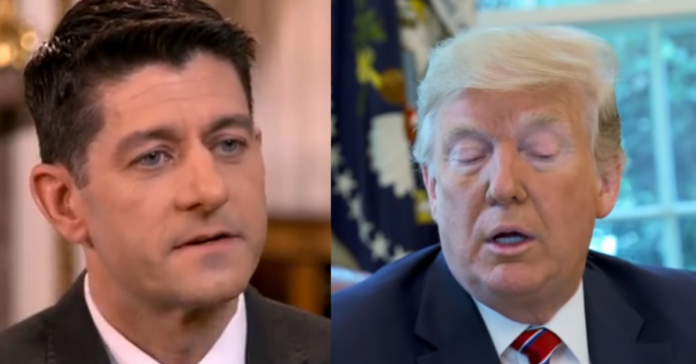 Paul Ryan just can’t help himself. In a new book by Politico’s Tim Alberta called “American Carnage” Ryan goes off on Trump saying retirement was an escape hatch because he didn’t want to work with Trump for another two years.

“I told myself I gotta have a relationship with this guy to help him get his mind right,” Ryan said, according to the book.

“Because, I’m telling you, he didn’t know anything about government … I wanted to scold him all the time.”

“We’ve gotten so numbed by it all,” Ryan added. “Not in government, but where we live our lives, we have a responsibility to try and rebuild.”

Ryan went on to say that people around Trump “helped to stop him from making bad decisions all the time.”

Paul Ryan, who fled Congress when the going got tough, who added trillions to the debt while campaigning for fiscal restraint (remember Trump wanted to raise taxes on the wealthy but Ryan and his gang would not), just proved he is a total fraud.

What can be gained by trashing Trump like this? Not much, unless he is trying to set himself as some kind of anti-Trump for a distant election cycle.

Who knows what drives these men, but if Trump is so bad why did he do nothing when he had the power to do something?

Because he is a coward, who took advantage of the power Trump returned to a hapless GOP for his personal aims. Thankfully, Trump stooped Ryan’s most radical ideas like gutting Socal Security and Medicare.