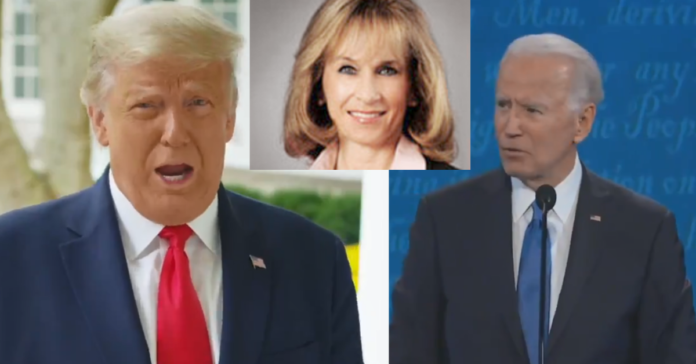 The plot thickens and Joe Biden and the Democrats are not happy after Pennsylvania Judge Patricia A. McCullough put Biden on notice with a Friday filing.

She halted PA from certifying the results from the election and was attacked in the media for it. The ruling was appealed and stayed but the Supreme Court but the fight is not over.

She just came forward with a new filing saying she ruled properly and she explained why the PA Supreme Court should agree with her and it is bad news for Biden.

She wrote, “Additionally, Petitioners appear to have established a likelihood to succeed” in their lawsuit claiming only the state constitution offers valid reasons for expanding mail ballots. This suit is not technically from Trump but from a few GOP elected officials.

Even with this filing, it is still an uphill battle for while legislatures have the right to chose electors most experts say they have to change the law before the election not after. But if the GOP wins this case they may get the chance. Wow, who saw this coming?

Her filing states: “There is no harm to Respondents by the relief fashioned by this Court. The “Safe Harbor” provision of 3 U.S.C. §5 does not expire until December 8, 2020, and the Electoral College does not vote for president and vice president until December 14, 2020.

Additionally, Petitioners appear to have established a likelihood to succeed on the merits because Petitioners have asserted the Constitution does not provide a mechanism for the legislature to allow for expansion of absentee voting without a constitutional amendment. Petitioners appear to have a viable claim that the mail-in ballot procedures set forth in Act 77 contravene Pa. 4 FNA preliminary injunction may issue only upon the showing of six essential prerequisites, described as follows:

First, a party seeking a preliminary injunction must show that an injunction is necessary to prevent immediate and irreparable harm that cannot be adequately compensated by damages . . . .

Second, the party must show that greater injury would result from refusing an injunction than from granting it, and, concomitantly, that issuance of an injunction will not substantially harm other interested parties in the proceedings . . . .

Third, the party must show that a preliminary injunction will properly restore the parties to their status as it existed immediately prior to the alleged wrongful conduct . . . .

Fourth, the party seeking an injunction must show that the activity it seeks to restrain is actionable, that its right to relief is clear, and that the wrong is manifest, or, in other words, must show that it is likely to prevail on the merits . . . .

Fifth, the party must show that the injunction it seeks is reasonably suited to abate the offending activity . . . .

Sixth and finally, the party seeking an injunction must show that a preliminary injunction will not adversely affect the public interest. Reed v. Harrisburg City Council, 927 A.2d 698, 702-03 (Pa. Cmwlth. 2007). 11 Const. Article VII Section 14 as the plain language of that constitutional provision is at odds with the mail-in provisions of Act 77.

Since this presents an issue of law which has already been thoroughly briefed by the parties, this Court can state that Petitioners have a likelihood of success on the merits of its Pennsylvania Constitutional claim.

Without the emergency relief ordered by this Court, there would be the likelihood of irreparable harm to Petitioners.

As to Petitioner Kelly, although it appears that he gained the most votes in the election for the office he seeks, that result has yet to be certified. Further, he may suffer irreparable harm prospectively should he seek election to public office in the future. If what may be an unconstitutional mail-in voting process remains extant, such mail-in ballots may make the difference as to whether he is successful or not.

As to Petitioners Parnell and Logan, mail-in ballots may have made the difference as to whether they have won or lost their respective elections. Hence, their fates may well turn upon the constitutionality of Act 77. The other voters in this case assert their constitutional voting rights as citizens of Pennsylvania would be irreparably harmed. Conversely, since the relief ordered by the Court is on an emergency basis, Respondents face no irreparable harm. In any event, the matter of irreparable harm would have been assessed at the evidentiary hearing. The relief ordered by this Court is also in the public interest. Any claim that the voters of this Commonwealth are disenfranchised by this Court’s order are spurious. The Order at issue does nothing more than preserve the status quo pending further and immediate review.

That being said, this Court is mindful that one of the alternative reliefs noted by Petitioners would cause the 12 disenfranchisement of the nearly seven million Pennsylvanians who voted in the 2020 General Election.

Specifically, Respondents claim that a temporary stay would disenfranchise voters as the legislature would appoint the electors to the Election College.

However, as noted, the legislature is not authorized to appoint the electors to the Electoral College until December 8, the “Federal Safe Harbor” date for certifying results for presidential electors. The Court agrees it would be untenable for the legislature to appoint the electors where an election has already occurred, if the majority of voters who did not vote by mail entered their votes in accord with a constitutionally recognized method, as such action would result in the disenfranchisement of every voter in the Commonwealth who voted in this election – not only those whose ballots are being challenged due to the constitutionality of Act 77.

However, this is not the only equitable remedy available in a matter which hinges upon upholding a most basic constitutional right of the people to a fair and free election. Hence, Respondents have not established that greater harm will result in providing emergency relief, than the harm suffered by the public due to the results of a purportedly unconstitutional election.5 5 The U.S. Supreme Court has addressed various circumstances concerning disenfranchisement of votes.

For instance, it has held the right to vote is foundational to our Republic and this fundamental right “can be denied by a debasement or dilution of the weight of a citizen’s vote just as effectively as by wholly prohibiting the free exercise of the franchise.” Reynolds v. Sims, 377 U.S. 533, 555 (1964). Reynolds, which established the “one person, one vote” doctrine, is the seminal case on voter dilution. Under this concept, a mail-in voting process that would exceed the limits of absentee voting prescribed in Pa. Const. Article VII sec 14 could be construed as violating the “one person one vote.” In that event, the sheer magnitude of the number of mail-in ballots would not be a basis to disregard not only this provision of the Pennsylvania Constitution but also the “one person, one vote” doctrine established by Reynolds, one of the bedrock decisions of the U.S. Supreme Court.

For all of the above reasons, the Court respectfully submits that the emergency preliminary injunction was properly issued and should be upheld pending an expedited emergency evidentiary hearing.”

BREAKING REPORT: Judge Patricia A. McCullough rules that PA preliminary ELECTION CERTIFICATION injunction was PROPERLY ISSUED and should be upheld..

"Additionally, Petitioners appear to have established a
likelihood to succeed."