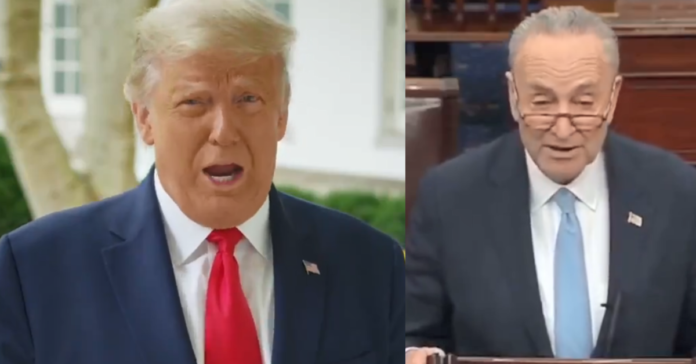 Rand Paul just sent an unmistakable message to Chuck Schumer and the Dems as they embark on another quest to convict Trump in an impeachment trial.

While it is never good to understate the dislike among some of the GOP Senators for Trump, they all know where their bread is buttered and they do not want above all to have to get a real job in the unforgiving world. The Washington gravy train is preferable and make no mistake that is all any of them, on both sides, care about.

Trump knows this so he put some pressure on them and it seemed to have worked and it looks like the Dems will not have the votes because Rand Paul forced a vote on whether the trial is even constitutional and only 5 GOP Senators voted that it is. Schumer needs 17 GOP votes to convict.

“Some of my Republican colleagues have latched onto a fringe legal theory that the Senate does not have the constitutional power to hold a trial because Donald Trump is no longer in office,” said Senate Majority Leader Chuck Schumer (D-N.Y.).

“This argument has been roundly debunked by constitutional scholars from the left, right and center. It defies precedent, historic practice, and basic common sense,” he added.

“I will admit to you I did not think we’d be having a vote on this at this point in time,” said Sen. Lisa Murkowski (R-Alaska). “My review of it has led me to conclude that it is constitutional in recognizing that impeachment is not solely about removing a president, it is also a matter of political consequence,” Murkowski said.

Mitt Romney added that “the preponderance of opinion with regards to the constitutionality of a trial of impeachment of a former president is saying that it is a constitutional process.”

The Senate sent a strong signal Tuesday that there are not nearly enough votes to convict President Trump in an impeachment trial when only five GOP senators rejected an effort by Sen. Rand Paul (R-Ky.) to declare the looming trial unconstitutional.

The vote is the clearest sign yet that Trump is heading toward a second acquittal and offers an early insight into which Republicans are lining up behind an argument that his second impeachment trial isn’t constitutional.

Trump will be the first president to undergo a trial after leaving office, but the Senate previously held an impeachment trial for a Cabinet official after they left office.