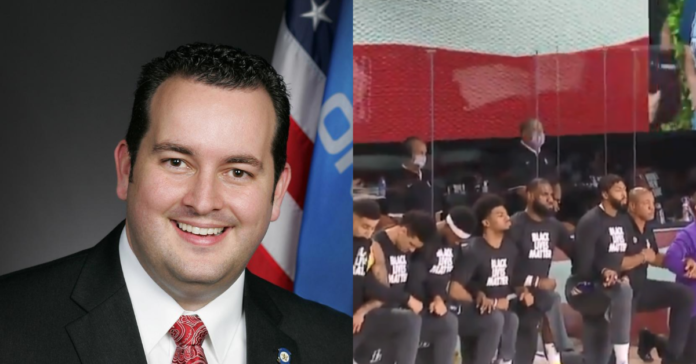 A Republican representative from the state of Oklahoma is dropping the hammer on some NBA players who want to take a knee rather than stand for the national anthem.

State Rep. Sean Roberts is not happy with the Oklahoma City Thunder professional basketball team for kneeling to re-start the NBA season.

But he is not just some disgruntled fan, it turned out the Thunder like all pro teams get sweetheart tax deals from state and local governments.

And he wants to claw back some or thoroughly examine the massive tax credits given to the Oklahoma City Thunder if they want to keep kneeling.

Rep. Sean Roberts said in a statement that the “significant tax benefits” the Thunder are scheduled to receive until 2024 need to be looked at.

“By kneeling during the playing of the national anthem, the NBA and its players are showing disrespect to the American flag and all it stands for.

This anti-patriotic act makes clear the NBA’s support of the Black Lives Matter group and its goal of defunding our nation’s police, its ties to Marxism, and its efforts to destroy nuclear families.

Through the Quality Jobs Act, the Thunder is still under contract to receive these tax breaks from our state until 2024.

Perhaps these funds would be better served in support of our police departments rather than giving tax breaks to an organization that supports defunding police and the dissolution of the American nuclear family.”

Oklahoma State Rep. Sean Roberts has threatened to "reexamine the significant tax breaks," given to the Thunder if the team kneels during the national anthem (which they did before today's game).

We in Seattle will begrudgingly bite the bullet and take the team back, okay? pic.twitter.com/sJgfrgB9HU