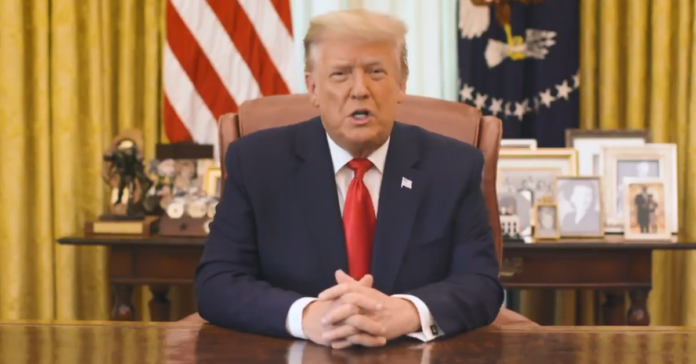 Two Republican lawmakers in Ohio are set to introduce a bill to create the ‘President Donald J. Trump Day’ on Trump’s birthday June 14.

State Reps. Reggie Stoltzfus and Jon Cross will try to introduce the bill in the Ohio House of Representatives to make this happen.

“Former President Donald J. Trump was our 45th President of the United States and against great odds, accomplished many things that have led our nation to unparalleled prosperity,” the two wrote to fellow lawmakers.

“Trump personified the emotions of millions of Ohioans who for too long have felt marginalized by our government and the American political system,” they wrote.

“While the media tarnishes his achievements and his legacy, the legislation will help ensure that for one day each year the voices of millions of people from all corners of our state will be commemorated.”

The two said the bill would show “that we as a legislature recognize the accomplishments of his administration, and that the Ohio House believes it is imperative we set aside a day to celebrate one of the greatest presidents in American history.”

From The Ohio Capital Journal:

Trump carried Ohio by an 8% margin over Joe Biden, though he lost the Electoral College and therefore the presidency.

Dozens of Republicans in the Ohio legislature did not initially view Biden’s win as being legitimate.

In December, a number of them — including Stoltzfus and Cross — signed a letter urging Ohio Attorney General Dave Yost to support a Texas lawsuit filed with the U.S. Supreme Court contesting the 2020 election results.

Yost disagreed with the lawsuit’s premise to undermine the election results, though he filed a brief asking the court to rule generally on the constitutionality of election changes made by states that were the basis of the suit.

“Let’s show the 3,154,834 Ohio voters who cast their ballot to re-elect Donald J. Trump that we as a legislature recognize the accomplishments of his administration,” the email said.

Other modern presidents who have state-level holidays include Barack Obama and Ronald Reagan.

While June 14 is the former president’s birthday, it’s also Flag Day, which was started in the last century to mark the date of the adoption of the American Flag in 1777.

One Democrat said he felt that June 14 would be “disrespectful.”

“I don’t like the idea of changing an existing federal holiday that honors the flag,” state Rep. Jeff Crossman, D-Parma, told Cincinnati.com.