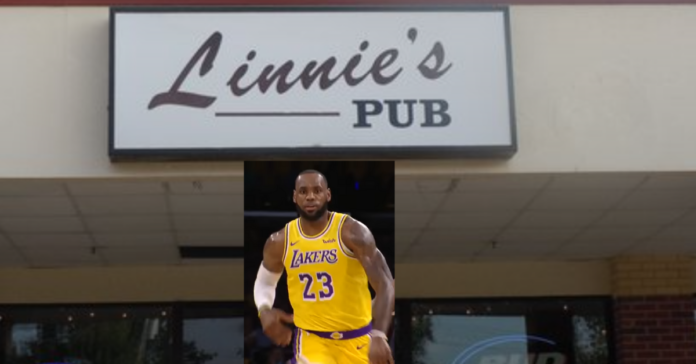 Linnie’s Pub’s owner Jay Linneman is not backing down in his feud with NBA star LeBron James. Linnie banned NBA games until James is tossed from the league and went viral for it. Jay broke his silence to a local reporter and said he’s had a ton of positive and negative responses to his Twitter back and forth with the future Hall of Famer while a sign at a local gas station thanked LeBron because “Linne’s has never been busier.”

“The support for the position has been overwhelmingly positive and has far outweighed the negatives,” Lineman said. A gas station sign on Westbourne Road within a couple of miles of the pub in Delhi Township put up a sign below the price of gasoline: “Hey LeBron, the West Side thanks you. Linne’s has never been busier.”

“I hope people channel the support to law enforcement and not necessarily to Linnie’s Pub,” Jay said. “If anyone wants to watch an NBA game, don’t come to Linnie’s Pub,” owner Jay Linneman said earlier. “We will not air them until LeBron James has been expelled from the NBA.”

LeBron deleted the tweet saying, “Anger does any of us any good and that includes myself. Gathering all the facts and educating does though! My anger still is here for what happened that lil girl. My sympathy for her family and may justice prevail!”

“By any measure, it was a volatile situation. The woman who was killed was wielding a knife, was violent, appeared to be threatening the lives of others.

“The facts should be determined, but the left doesn’t care about the facts, they care about demonizing and attacking law enforcement and I think it’s wrong,” he said.

“We have to judge each incident based on what we see and the facts we know.

“They roll up on the scene. They see people tussling around. Someone has a knife, their job is to protect and serve every life on that scene.

Business Is Reportedly Booming For The Bar That Banned NBA Games Because Of LeBron James https://t.co/GUPYo4kczq

Every business owner with any connections to sporting events should follow the lead of Linne's pub.
Apply it to the NFL, NBA, MLB, and specific individuals that are arrogant enough to destroy American sports through politicization! https://t.co/qHe3c7kLwH

Bar In Ohio Near Cincinnati Says 'No' To Televised Games With LeBron James https://t.co/mvv6sS3jtz

Linnie's Pub in Cincinnati Ohio has BANNED NBA games from their bar until LeBron James is EXPELLED from the league for inciting violence against police officers.

These are patriots that we need to support!