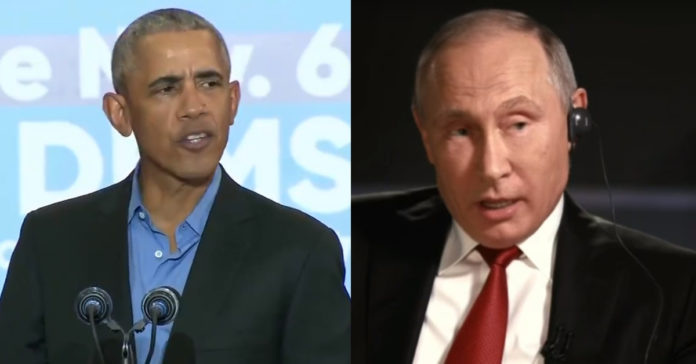 In an absolute bombshell, Buzzfeed News is reporting on a secret back channel between the Russians and Obama’s Treasury Department.

We set up a system to track terrorist money and financing with the Russians who quickly proved that was not all they were interested in.

Shockingly, even after being warned by supervisors these backchannels kept going and even more shockingly, they were using unsecured systems like Gmail to communicate.

What in the hell was going on during the election because it does not seem like we are being told the real story – by both Trump’s team and the Obama administration.

From Buzzfeed: US Treasury Department officials used a Gmail back channel with the Russian government as the Kremlin sought sensitive financial information on its enemies in America and across the globe, according to documents reviewed by BuzzFeed News.

The extraordinary unofficial line of communication arose in the final year of the Obama administration — in the midst of what multiple US intelligence agencies have said was a secret campaign by the Kremlin to interfere in the US election.

“They are passing information that may have interest to the Russians for other reasons,” a FinCEN official wrote to colleagues in March 2017. “One has to wonder what the heck is going on here.” This official filed for whistleblower protection and quit last year.

In emails reviewed by BuzzFeed News, FinCEN insiders expressed shock that staff in another Treasury office had agreed to communicate with the Russians outside of normal, secure channels. FinCEN uses an encrypted portal called the Egmont Secure Web to exchange information with more than 160 other countries, including Russia, and to keep sensitive financial data out of the wrong hands.

A former US intelligence official who served in Russia for many years told BuzzFeed News that the use of unsecure accounts is a major red flag for espionage activity.

“Rosfinmonitoring is under the command and control of the FSB,” the former intelligence officer said, referring to Russia’s spy agency. “If you are a Russian government entity and you are communicating with Americans, you have an FSB officer sitting right next to you and that officer is probably sending the email.