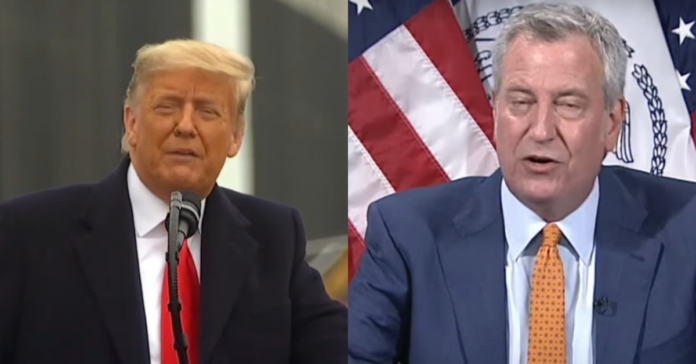 New York City caved on Sunday and reversed Mayor de Blasio’s petty move to close skating rinks in Central Park six weeks before their usual closing dates to hurt the Trump organization that has the contract to manage the rinks.

Eric Trump and most New York residents ripped the move as small-minded and one that hurt innocent kids more than the Trump organization. Political retribution gone too far — so it is good to see calmer heads prevail.

Eric Trump gave a classy statement that read, “Mr. Mayor – Thank You for keeping Wollman and Lasker Rinks open — you’ve just made countless NYC families (along w our 250 employees) incredibly happy. This is a bright moment for New York and please know we appreciate it. I look forward to saying “thanks” in person.”

“New York City kids deserve all the time on the ice they can get this year. The Wollman and Lasker rinks will stay open under current management for the few weeks left in this season,” City Hall Press Secretary Bill Neidhardt told The Post.

“But make no mistake, we will not be doing business with the Trump Organization going forward. Inciting an insurrection will never be forgotten or forgiven.”

Eric Trump led the charge to shame the NYC politicians to do the right thing and it actually worked. He said last week when they made the petty move.

“Despite our appeals to the City to allow us to continue operations through the duration of the skating season — which would not only save the jobs of nearly 250 individuals who work or otherwise provide services Wollman and Lasker Rinks, but also allow us to continue to provide the numerous public skating sessions and skating and hockey programs that we host on a daily basis — the City rejected our efforts,” the Trump Organization said in a statement.

“The city is saying in effect, ‘We don’t care if it destroys the skating season; we want you out now,’” Trump said. “This is one of the only things that kids can do” for outdoor winter recreation, he noted.

“The mayor is absolutely petty. This isn’t about us, this is about the people of the city who come here to skate and disabled kids who joined hockey teams and others who joined skating school and take lessons every week,” Trump said.

“This is purely a political stunt that only hurts New Yorkers,” Trump said.

“Instead of focusing on a dying city which everyone is leaving because of rising crime, high taxes, closed businesses and totally incompetent leadership, the mayor is painting signs in front of Trump Tower and destroying more jobs along with the only outdoor activity available to children during a pandemic.”

“To get back at a person who sits on the other side of the political aisle and now lives in Florida?”

.@NYCMayor Mr. Mayor – Thank You for keeping Wollman and Lasker Rinks open — you’ve just made countless NYC families (along w our 250 employees) incredibly happy. This is a bright moment for New York and please know we appreciate it. I look forward to saying “thanks” in person.