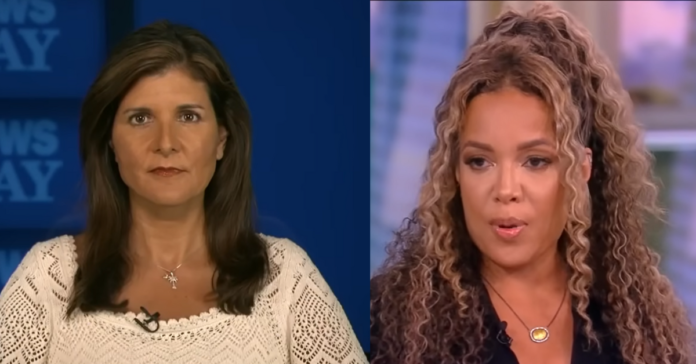 Nikki Haley shut down the ladies on The View after co-host Sunny Hostin made an absurd comment calling the former United Nations Ambassador a “chameleon” for not going by her first name.

Haley said: “Thanks for your concern @Sunny. It’s racist of you to judge my name. Nikki is an Indian name and is on my birth certificate—and I’m proud of that.  What’s sad is the left’s hypocrisy towards conservative minorities. By the way, last I checked Sunny isn’t your birth name…

“Sunny is literally the worst person on network television. And she doesn’t even realize she totally threw Whoopi under the bus…her real name is Caryn Johnson,” said podcast host Dave Rubin. Sunny id not her real name either Hostin admitted kater in the show. Below is a transcript:

ALYSSA FARAH GRIFFIN: I think it’s time for new blood. For me I would love to see Republicans —

SUNNY HOSTIN (interrupting): Who on your side is credible enough –

JOY BEHAR (interrupting): And can pass –

HOSTIN: — and can pass the primary and be in the general.

HOSTIN: And Nikki Haley the chameleon. And Liz Cheney who’s not the savior.

HOSTIN: What is her real name again?

SARA HAINES: Alyssa, I have a question. Asides from Ron DeSantis–

FARAH GRIFFIN: A lot – a lot of people don’t go by their actual, real name.

BEHAR: What is her name?

FARAH GRIFFIN: I believe it’s – I don’t want to mispronounce it. It’s Indian. Her background is Indian.

HOSTIN: But she doesn’t necessarily – I think if she leaned into being someone of color it be different.

FARAH GRIFFIN: Just real quick, cause the Nikki Haley conversation came up. So, Nikki Haley’s gone by Nikki since she was a child. It’s documented in high school. I wouldn’t be shocked that as someone, an Indian woman growing up in South Carolina at that she actually did to avoid prejudice. So, I just want to be careful about critiquing her for going by the name she’s always gone by.

HOSTIN: Yeah, there were some of us that can be chameleons and decide not to embrace our ethnicity so that we can pass – so that we don’t have to be –

FARAH GRIFFIN: I didn’t want to be the one to say it.

HOSTIN: Because most Americans can’t pronounce Asunción because of the undereducation in our country.

HAINES: But sometimes I would say what Alyssa is saying is that people gravitate to names for different reasons.

WHOOPI GOLDBERG: I’m just going to kill this conversation! I am authentically myself! I am Whoopi Goldberg and we’ll be right back!

Thanks for your concern @Sunny. It's racist of you to judge my name.

Nikki is an Indian name and is on my birth certificate—and I'm proud of that.

What's sad is the left's hypocrisy towards conservative minorities.

By the way, last I checked Sunny isn't your birth name… pic.twitter.com/NI3KZXjD6F