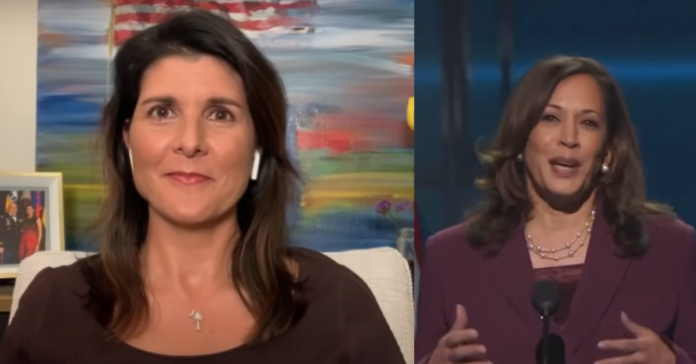 Former U.S. Ambassador to the United Nations Nikki Haley ripped Joe Biden and Kamala Harris before sending out a warning to America over the prospect Kamala may be president one day.

“We had the solution. I mean, the Trump administration had the same migrant problem, but they fixed it. And what they did was they used tough love with our friends. You know, Guatemala and Honduras are friends of America.

“They are not anti-American. These kids are — and so many of these migrants are — coming from Central America. And what the president did was he gave them tough love. He said, “This is what we expect of you.

“We will partner with you, but you’ve got to control the situation in your country. If they want asylum, they have to apply from there. From there.”

“He worked through Mexico, which is where they were coming from, to make sure that we had a handle on it.

“It’s really unacceptable that Biden is so obsessed with Trump reversals that he’ll literally put the American public and these kids at risk the way he is.

“And then he gives Kamala Harris, apparently, she’s the one in charge. This is the same person that encouraged 7,000 migrants to come to America.

“She referred to ICE as the KKK. She’s now in charge of this.

“She’s been missing in action. And God help us if she ever becomes president because if this is how she handles a crisis, I mean, I just can’t imagine how she would run our country.

“And so it’s really devastating.

“But, you know, the one thing we did and I traveled to Honduras and Guatemala, we had these conversations with them and it was, “Help us help you, but we’re not going to sit there and put up with your problems.”

“And, you know, really, the idea that anyone would be OK with the way Kamala Harris and Joe Biden are handling this is is just unthinkable,” she said.

“Former U.N. Ambassador Nikki Haley, blasted the Biden administration for encouraging investment in the world’s largest state sponsor of terrorism while simultaneously urging a boycott of the state of Georgia.” https://t.co/p7tKG1cgSh

Liberals and big corporations need to stop treating minorities like we're stupid. We are perfectly capable of getting a photo ID.