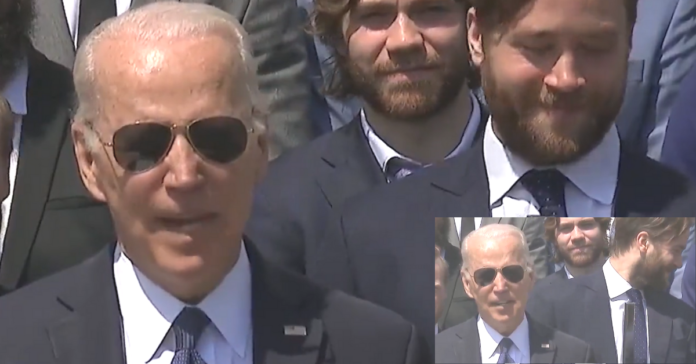 A Tampa Bay Lighting player was seen laughing at President Joe Biden after he made another awful flub that he didn’t seem to know he made because he didn’t correct it. Biden mistakenly called NHL commissioner Gary Bettman “Gary Batman” at the team’s White House visit on Monday.

Biden made the flub during his speech to honor the Stanley Cup winning team and where he thanked Bettman for being there. Look, forget about whether Biden is doing a good job or not. The main role of a politician is to communicate that he is doing a good job.

But Biden cannot get through one speech without embarrassing himself, the Dem Party, and the nation. And he won’t get any better at speaking so unless they put him back in the basement the Dems are going to have a rough time of it in 2022 and 2024.

“I want to thank Commissioner Gary Batman for being here as well,” Biden said but all eyes were on Lighting star defenseman Victor Hedman laughing and turning his head to try to get out of the camera shot.

Joe Biden calls NHL Commisioner Gary Bettman “Gary Batman” and one of the players on the Lightning standing behind him starts cracking up.
pic.twitter.com/KHUZrs8Mux

“At the risk of stating the obvious here, it’s a pretty good time to be a sports fan in Tampa.

“I don’t know what the hell you have in the water there.

“The Buccaneers won the Super Bowl, the Rays won the pennant, and these guys behind me became back-to-back Stanley Cup champions.”

“Joe Biden calls NHL Commissioner Gary Bettman “Gary Batman” and one of the players on the Lightning standing behind him starts cracking up.

“I just want to say to everyone angry at me for saying “one of the players” instead of “Norris Trophy, Conn Smythe trophy, and back to back Stanley Cup champion Victor Hedman” that I’m going to confession to apologize for this grave sin.”

We’re all Victor Hedman here, having a laugh at Biden’s expense — evidently, he is not the avid sports fan that past U.S. presidents were. Despite Biden’s error, a good time was seemingly had by all.

“Pretty much everybody was on board, and everybody that could make it — former players and stuff — they all tried to make it here,” defenseman Ryan McDonagh said.

“It’s just a great tradition that we have: You become part of a championship team, you get to go to the White House and meet the president.”

McDonagh, who has played for the United States in several international competitions, spoke on behalf of the Lightning. Because of the COVID-19 pandemic, the Lightning were unable to take part in the White House ceremonies as quickly as they’d hoped, a point that wasn’t lost on captain Steven Stamkos.

“It was a long time in the making,” Stamkos said. “We weren’t sure if we were going to get this opportunity, but it was certainly worth the wait.”

I just want to say to everyone angry at me for saying "one of the players" instead of "Norris Trophy, Conn Smythe trophy, and back to back Stanley Cup champion Victor Hedman" that I'm going to confession to apologize for this grave sin.