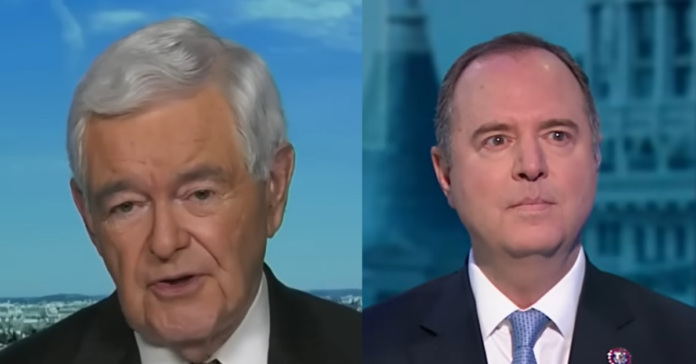 Newt said: “I think Nancy Pelosi set the precedent. She did something that had never been done before and reached into the minority party to decide who could and could not serve on some committees. I think Kevin McCarthy is following her precedent.

“So the Democrats have nothing to complain about because they started this dance and frankly, the three people he’s picked so totally deserve to be kicked off committees. It’s unbelievable. Adam Schiff made a career out of lying to the American people while serving as chairman of the Intelligence Committee without any question, just plain, flat-out lying.

“Swalwell has had a relationship with a Chinese communist.

“That’s unimaginable for somebody who’s going to have security clearance.

“So I think those are three pretty good targets. And I commend Speaker-designate McCarthy for taking them head-on.

“He will adhere to the wishes of the lowest common denominator.

“And if that lowest common denominator wants to remove people from committees, that’s what they’ll do.”

“It’s going to be chaos with Republican leadership.”

Kevin said earier: “One thing I said from the very beginning, Eric Swalwell cannot get a security clearance in the public sector.

“Why would we ever give him a security clearance and the secrets to America? So I will not allow him to be on Intel.

“You have Adam Schiff, who lied to the American public time and again.

“We will not allow him to be on the Intel Committee either.

“Look at Congresswoman Omar, her antisemitic comments that have gone forward.

“We’re not going to allow her to be on Foreign Affairs.

“But we’re also going to stand up to what’s happening, not just in the halls in Congress, but what’s happening to our higher education institutions, the antisemitism that’s going on on these campuses and others.

“We will investigate that as well and stop this to make sure that America does have the freedoms that we said we would keep, and we will stand up to it as we move forward,” he said.

Schiff on Kevin McCarthy possibly removing him from committees: "I suspect he will do whatever Marjorie Taylor Greene wants him to do … he will adhere to the wishes of the lowest common denominator … it's going to be chaos with the Republican leadership." pic.twitter.com/a1AK2k68p8