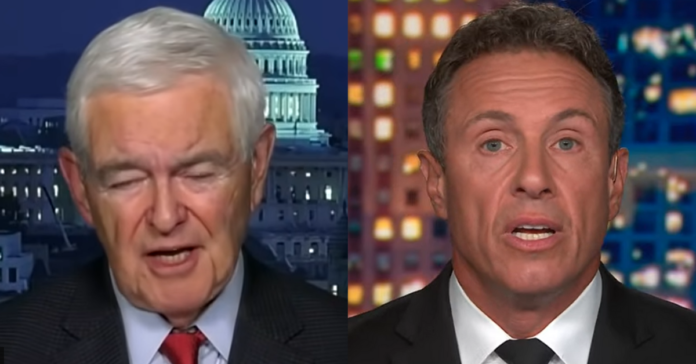 Fox News contributor Newt Gingrich went on “America’s Newsroom” today and called for CNN to fire host Chris Cuomo after new documents showed what he really did, not what he said he did, to help his disgraced brother Andrew Cuomo fight sexual assault charges.

Newt said: “The fact is, by any reasonable journalistic standard, Chris Cuomo has to go. First of all, because he lied to his viewers.

“If he said to his viewers I’m doing everything I can to help my brother, he is my brother and I’m going to recuse myself on air and not talk about it and you all know I have a bias, he would be fine. And the fact that he happened to use every asset he had to help his brother, would be fine.

“I think the clincher is he directly lied to the viewers on CNN, and I think it’s pretty hard for CNN to tolerate that and keep him on.

“Again, senior management of these big corporations make lots of decisions that you and I would be surprised by,” Newt said.

“The thousands of pages of additional transcripts and exhibits that were released today by the NY Attorney General deserve a thorough review and consideration,” a CNN spokesperson said. “We will be having conversations and seeking additional clarity about their significance as they relate to CNN over the next several days.”

Earlier CNN and Cuomo said the anchor played a role in responding to the harassment claims in May calling the decision “inappropriate.”

“I am family first, job second,” Cuomo said on his show that evening in May. “It was a mistake, because I put my colleagues here, who I believe are the best in the business, in a bad spot. I never intended for that, I would never intend for that, and I’m sorry for that.”

According to the documents, Cuomo said:

“I would — when asked, I would reach out to sources, other journalists, to see if they had heard of anybody else coming out.

“I was frequently in contact when we would hear word that there were other people coming out. Or there was more to be learned about somebody, I would talk to other journalists to hear what they had heard.

“I called a fellow journalist who works with Ronan a lot. And I didn’t want to contact Ronan directly. I know him.

“The concern was that Ronan always has more people. You know, I mean, that’s part of his currency as a journalist, is that people come to him to expand understandings.

“So the assumption was he must have new people if he’s waiting so long to have written about this.

“And then he didn’t. So, what the context is specifically is: I had heard that all he was writing, the only person he was writing about was Lindsey Boylan.

“It’s not exactly a loyalty-based business.

“If I had tried to influence any of the reporting at CNN or anywhere else, I guarantee you you people would know, and so would a lot of others.

“So the idea of one reporter calling another to find out about what’s coming down the pipe is completely business-as-usual,” he said.

NEW: CNN host Chris Cuomo used his sources to get info on brother Andrew Cuomo's accusers. He also engaged with sources to get a read on upcoming stories that took aim at his brother.

"I have a lead on the wedding girl," Cuomo told Melissa DeRosa. https://t.co/KNEYbGXoGu

In a text exchange between @ChrisCuomo and top Andrew Cuomo aide Melissa DeRosa, the CNN host asks to “please let me help with the prep” of his older brother’s sexual harassment defense and helps devise a PR strategy. pic.twitter.com/XnQ3W2axWE

Chris Cuomo previously told viewers that he wasn’t an adviser to his older brother, he was there to “listen and offer my take.”

But new texts show he was advising and running interference for the former governor.

“We are making mistakes we can’t afford.” pic.twitter.com/LyVpuVb0x0