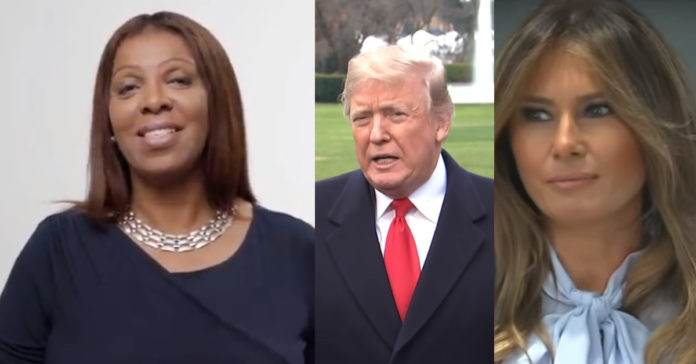 The left will stop at nothing to inflict maximum damage on President Trump and his family and his various businesses. They can’t win in politics so they seek to destroy, as they did to Judge Kavanaugh.

The same playbook but with higher stakes as the incoming New York state Attorney general made clear.

She just unveiled her plans for the entire Trump family and one wonders if the voters of that state will condone throwing money down the drain.

Look, Trump and his business have been vetted and audited by the IRS so many times that it is inconceivable they will find anything other than what Trump said during the campaign – that our laws are a joke and they are easily and legally gamed.

Only a fool would not take advantage of the laws to help their business and Trump is no fool. My guess is they will find more malfeasance with the Democrats he had to pay to operate in New York than within his empire.

From NBC: New York Attorney Gen.-elect Letitia James says she plans to launch sweeping investigations into President Donald Trump, his family and “anyone” in his circle who may have violated the law once she settles into her new job next month.

“We will use every area of the law to investigate President Trump and his business transactions and that of his family as well,” James, a Democrat, told NBC News in her first extensive interview since she was elected last month.

James outlined some of the probes she intends to pursue with regard to the president, his businesses and his family members. They include:

The June 2016 Trump Tower meeting with a Russian official.

Whether he is in violation of the emoluments clause in the U.S. Constitution through his New York businesses.

Continue to probe the Trump Foundation.

“We want to investigate anyone in his orbit who has, in fact, violated the law,” said James.