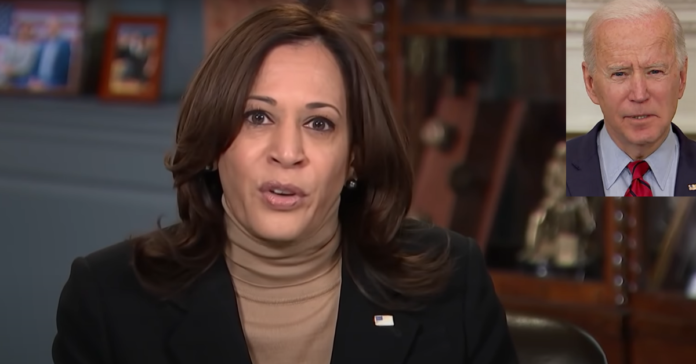 President Joe Biden’s border czar Kamala Harris has a whole new level of trouble coming her way after an explosive recording was leaked to Fox News by a source working on the border crisis.

Homeland Security Secretary Alejandro Mayorkas told Border Patrol agents in private that the border crisis is “unsustainable” and “we’re going to lose” if “borders are the first line of defense.”

“A couple of days ago I was down in Mexico, and I said look, you know, if, if our borders are the first line of defense, we’re going to lose and this is unsustainable,” Mayorkas said. “We can’t continue like this, our people in the field cant continue and our system isn’t built for it. It’s our responsibility to make sure that that never happens again.”

“The extent of the challenge should not be understated, but nor should our ability to meet it,” he said.

“For those of us who have been around here long enough … we don’t need to reinvent the wheel,” one border patrol agent told Mayorkas. “We’ve had this happen before. We know exactly how to shut it down. We need to make illegal entry illegal.”

However, during his public announcement Thursday regarding July’s migrant totals, Mayorkas insisted the surge of people at the southern border “is not new” as he downplayed previous monthly numbers.

“We are encountering an unprecedented number of migrants in between the ports of entry at our southern border,” Mayorkas said during a press conference in Brownsville, Texas. “We have seen the surges in migration before. We’ve seen them in the past, and migration surges are not new.”

…President Joe Biden’s administration has suggested the migration surge was “seasonal.” However, border authorities insist total crossings should be dwindling amid a summer heat wave that would make the journey exponentially more arduous.

Chad Wolf, a visiting fellow at the conservative Heritage Foundation and the former acting DHS secretary, blamed Biden for rescinding Trump-era policies and prompting the influx of migrants.

“This administration must be held accountable for its failed border strategy, and Congress must reject amnesty as part of the infrastructure debate currently raging in the House and Senate.”

The Biden administration is facing a "serious challenge" at the US southern border, Homeland Security Secretary Alejandro Mayorkas said Thursday, saying the US has encountered an "unprecedented" number of migrants illegally crossing the border. https://t.co/V2HzauIbMl