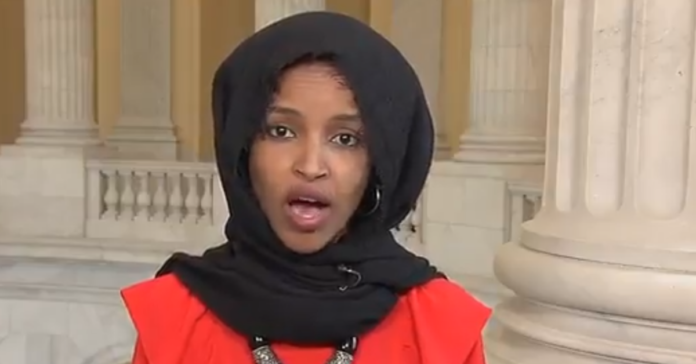 First, it should be said there may be an entirely innocent explanation for the discrepancies in Ilham Omar’s marriage history.

Divorce can get nasty so it is entirely possible that when Omar swore under oath during her “default” divorce filings that she hadn’t seen or couldn’t find her husband, she was telling the truth.

A default divorce is when one side has disappeared and does not contest or weigh in on the divorce proceedings.

The other side must swear under oath they cannot locate the other party or locate anyone who knows the other party. That said, there is an awful lot of smoke here…From The Daily Caller:

Rep. Ilhan Omar swore under oath in a 2017 divorce filing that she hadn’t seen her husband Ahmed N. Elmi in six years and didn’t know anyone who might be able to locate him — yet he appears to have designed a website for Omar’s sister this year, according to data hidden in the source code of that website.

The Democratic Minnesota congresswoman swore that she had not been able to locate the man she married — who the Minneapolis Star Tribune says may or may not be her brother — since 2011. She swore she didn’t know the names of anyone in her husband’s family and that the two had no mutual acquaintances who might know how to contact him.

According to Elmi’s Facebook profile, after attending college in North Dakota he moved to England and then to Nairobi, Kenya — the same city where Omar’s sister, Sahra Noor, lives and works as CEO of Grit Partners. Grit Partners’ website code contains data that indicates Elmi was involved in the creation of either the company’s website or its Instagram account.

The ties between Omar’s supposedly long-lost ex-husband and Omar’s sister appear to contradict Omar’s sworn testimony and add to the body of evidence that the ex-husband may be her brother, making all three siblings.

Other elements of her sworn filing also contain discrepancies. In arguing that she should be granted a divorce without her husband’s consent because he could not be located, she claimed that she did not know the name of a single member of her husband’s immediate family. She also claimed that her attempts to find him included unsuccessfully searching on social media — but he has been on Twitter since 2012 and Facebook since 2007 and is also on LinkedIn and other platforms.

Lying on a sworn form is perjury and each charge carries five years in prison, according to Minnesota law. Questions have been raised about the accuracy of approximately six statements on the sworn form.

Grit Partners’ website contains code generated by its web design software Squarespace that includes certain data that is not visible on the page itself. In a section of code powering the site’s links to its Twitter and Instagram pages, Elmi’s name is included, tying him to the Instagram account. It says “screenname: Ahmed Elmi” and “UserName: ahmednelmi.”

Elmi’s LinkedIn says he works as a freelance creator of “content, communications strategies and editorial for nonprofits, start-ups and global brands.”

The hidden code was discovered by David Steinberg, a veteran journalist most recently with PJ Media.

Omar requested a “default” divorce from Elmi in 2017, an unusual proceeding used where one spouse has disappeared and cannot be located. Since the process deprives one party of contesting the divorce, it required Omar to swear under oath that she had no clues whatsoever about how to contact him through other people.

The whole thing sounds absurd, but the data is starting to pile up. First, go back in time to this David Steinberg piece at PJ Media.

St. Paul Public Schools stated to me that federal law (FERPA) and Minnesota law forbid it from releasing the names of Ahmed N. Elmi’s parents/legal guardians, address, or phone number from his enrollment record without Elmi’s signed permission — or a warrant. I then contacted several members of the Class of 2003 — and I was told that Eli “was living with his father” while attending Arlington Senior High School. I have also obtained the likely address. Further, Elmi’s father was identified as the same man Ilhan Omar has always publicly referred to as her own father: Nur Said Elmi Mohamed.

Now check out this updated piece at the Daily Caller.

Rep. Ilhan Omar swore under oath in a 2017 divorce filing that she hadn’t seen her husband Ahmed N. Elmi in six years and didn’t know anyone who might be able to locate him — yet he appears to have designed a website for Omar’s sister this year, according to data hidden in the source code of that website.

And the Star-Tribune has added to the mix with the suggestion that she married her brother to skirt immigration laws. Not only that, but she formed a “crisis committee” to pressure reporters into not covering the story.