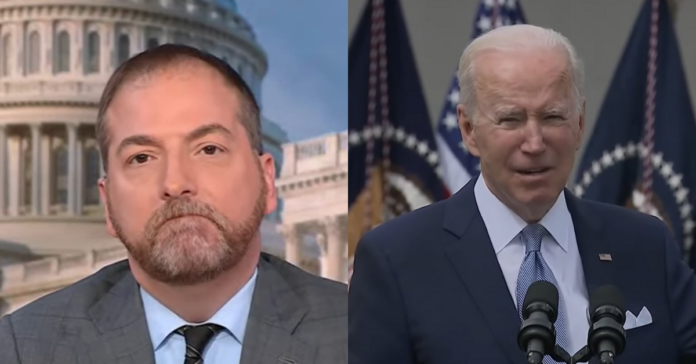 NBC host Chuck Todd called out President Joe Biden and his administration for being ‘easy to roll’ saying they don’t fight back. Chuck started by talking about the Trump-appointed judge who ended Biden’s mask mandate a few weeks early after the White House extended it.

Todd said: “If you got on a plane or a train or really any form of public transportation today, you probably noticed a pretty big change. Yesterday afternoon a Trump-appointed federal judge in Florida struck down the administration’s federal mask mandate for travelers, just days after the Centers for Disease Control extended it through early May.

“Folks, it’s one thing for a Trump judge to strike down an order from the Biden White House. But it’s an entirely different thing for the White House to let it happen without any legal pushback.

“And it’s not the first time recently that something hasn’t gone the White House’s way.

“They don’t fight back, they don’t defend their rationale. They just give you the emoji shrug.

“We saw it when the Supreme Court struck down their vaccine mandate for large employers.

“We may even be seeing it with the ongoing intraparty fight on Title 42.

“The Biden administration, with the full power and prestige of the presidency, with his party’s power on the line this November, has repeatedly looked as if they’re easy to roll,” he said.

Travelers were celebrating across the country Monday as airports and airlines dropped their mask requirements after a Florida federal judge voided the Biden administration’s mask mandate for planes, trains and buses.

But confusion also accompanied the enthusiasm as some airports, airlines and transportation agencies had yet to announce whether they would continue to enforce the mandate — or confirm that masks are still required.

“Feels good to be flying the moment the mask mandate was lifted. People are literally celebrating at this airport,” Darrin Smith tweeted Monday night.

.@chucktodd Calls Out Biden Administration After Judge Strikes Down Mask Mandate: 'They Don't Fight Back' https://t.co/fsfrOrTgeb