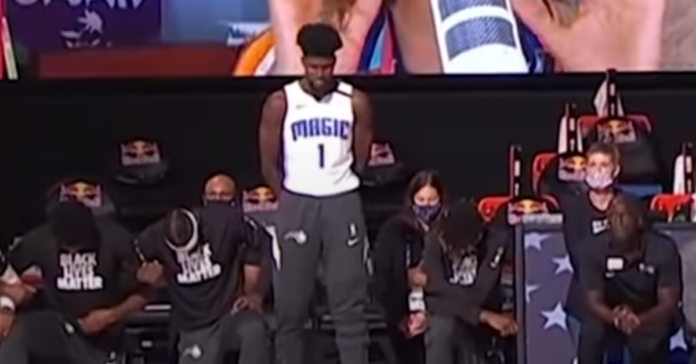 Orlando Magic basketball player Jonathan Issac not only stood alone, among players, for the national anthem but he also refused to wear any BLM gear. “So you didn’t kneel during the Anthem but you also didn’t wear a Black Lives Matter shirt,” asked a reporter. “Do you believe that black lives matter?”

“Absolutely. I believe that black lives matter,” Issac replied. “A lot went into my decision and part of it is first off, kneeling or wearing a Black Lives Matter t-shirt didn’t go hand in hand with supporting Black lives” he said.

“I believe that, for myself, my life has been supported through the Gospel of Jesus Christ and that everyone is made in the image of God and that we all fall short of God’s glory. And that each and every one of us every day do things that we shouldn’t do.”

Orlando Magic forward Jonathan Isaac was the lone player to stand during the national anthem on Friday as his teammates and Brooklyn Nets players knelt to protest racial injustice and police brutality.

Isaac was the lone person out of the first three games of the NBA’s restarted season. He also didn’t wear a Black Lives Matter shirt and instead chose to stand with his arms at his back with his Magic jersey showing.

It’s also worth noting that Isaac was ruled out for the rest of the season in February after suffering a significant knee injury in January. He was able to play because of the time lapse between the injury and the NBA restarting the season. He checked into the game wearing a giant white leg brace on his left leg.

It wasn’t immediately clear why Isaac chose to stand while his other teammates knelt.