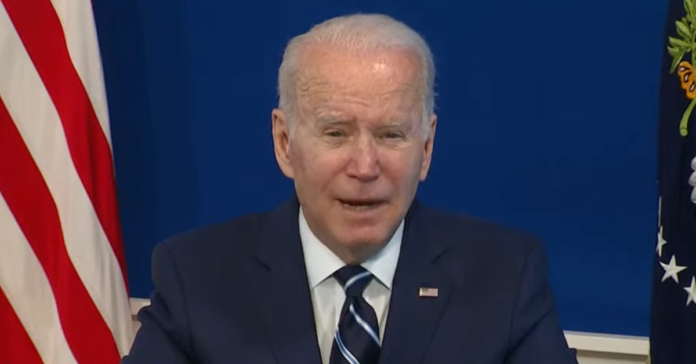 Law enforcement organizations are not happy Joe Biden is planning to use executive orders on police reform calling it unsustainable. They also ripped Biden for playing politics with the issue by using the EO’s to try to distract from ‘the worst week politically in his presidential career.’

Laura Cooper, executive director of the Major Cities Chiefs Association (MCCA), said: “Executive orders in lieu of congressional action is not a sustainable means of achieving and instituting change. Being pro reform and being supportive of law enforcement are not mutually exclusive and the MCCA hopes that any executive action taken will reflect a balance between improving law enforcement transparency and best practices while being supportive of the men and women who protect and serve our cities.

Sgt. Betsy Brantner Smith, spokesperson for the National Police Association, said: “After the worst week politically in his presidential career, it appears that Joe Biden plans to pivot to ‘police reform’ to prop up his faltering reputation and revive his popularity with ‘anti-police’ activists.

“The priority of the White House should be to protect all communities, instead of pandering to a militant wing of idealists and activists who believe that police officers are the problem, not the solution, to violent crime.

“The National Police Association encourages the President and his staff to make decisions utilizing the facts about crime in American, as well as about police use of force, and stop engaging in false rhetoric designed to vilify our profession.

“Right now, we need President Biden’s leadership, not his partisan pandering, if we are going to save the lives of both American law enforcement officers and the communities we are trying to protect.

“We have not yet seen any drafts of the Executive Order nor have been asked for feedback. We are, however, hopeful that the Administration will take into account its dialogue with Sheriffs and the law enforcement perspective on moving forward with reform.

“When it comes to ‘reform’ we need to think about improving training, enhancing enforcement with compassion and sentencing with purpose. Crime is rising. Recruiting and staffing are at historic lows yet the country overwhelmingly supports law enforcement and the adherence to the rule of law.”

President Joe Biden is planning to sign executive actions on police reform as early as this month, three people familiar with the plans said, as his administration seeks to unilaterally jumpstart an issue that’s a top priority for a key constituency.

The executive actions would follow Biden’s uphill battle to advance voting rights legislation, and could coincide with a similar effort by some Democratic lawmakers to revive the George Floyd Justice in Policing Act, which stalled on Capitol Hill after failed attempts to craft a bipartisan measure.

The focus on police reforms is part of what appears to be a last-ditch effort by the Biden administration to take action on some of the president’s signature initiatives in the run-up to his State of the Union Address on March 1.