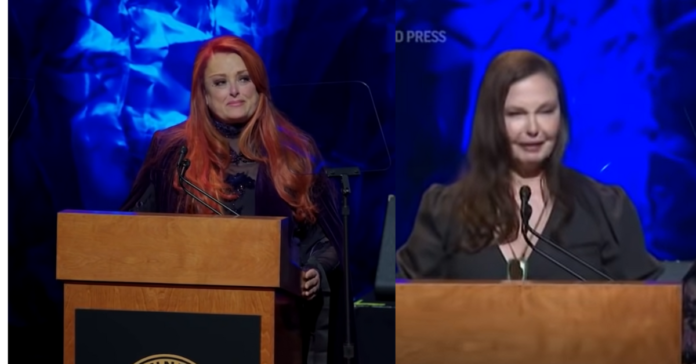 Ashley and Wynonna Judd were reportedly left out of her mother’s will. Naomi died by suicide on April 30th. She left her husband Larry Strickland in charge of her estate. Naomi was married to Strickland for 33 years. Naomi named Strickland’s brother Reginald and Daniel Kris Wiatr as ”co-executors.”

“I nominate and appoint my spouse, Larry Strickland, as Executor of my estate,” Naomi’s will reads.

“In the event my spouse ceases or fails to serve, then I nominate and appoint my brother-in-law, Reginald Strickland, and Daniel Kris Wiatr as Co-Executors. I direct that no bond shall be required of my Executor,” the will says.

“She used a weapon, a firearm,” Ashley said of Naomi’s death.

“That’s the piece of information that we are very uncomfortable sharing, but understand that we’re in a position that if we don’t say it someone else is going to.”

“Naomi and Larry had been married since May 1989. RadarOnline.com has been told Wynonna is “upset” at her mother’s baffling decision as she was part of the duo The Judds and “believes she was a major force behind her mother’s success.”

According to Page Six:

“According to the documents, the “Love Can Build a Bridge” singer – who suffered a life-long and public battle with depression – was of “sound mind and disposing memory” when she signed and approved the will.

“Melissa Sitzler, a senior account manager at a Tennessee law firm called Wiatr & Associates, and another individual named Abigail Muelder signed as witnesses, vouching that Naomi was of “sound mind, memory and understanding, and not under any restraint or in any respect incompetent to make a Last Will and Testament.”

Naomi Judd left her daughters, Wynonna and Ashley, out of her will https://t.co/7f6yyyOaZh pic.twitter.com/l7D47kPnn6

The late country singer died by suicide on April 30. https://t.co/uBbxsO1KnE