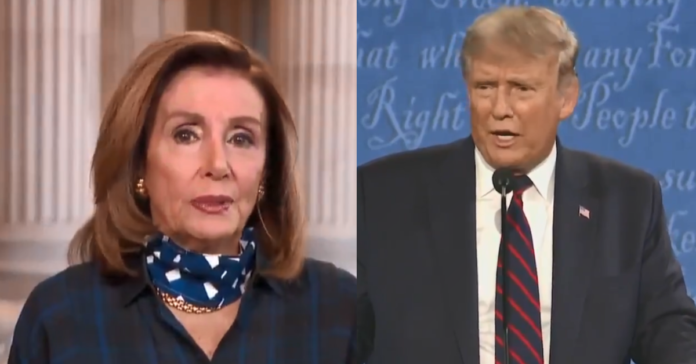 Nancy Pelosi is making her move on Trump and it is doomed to fail. She will unveil a new bill that would create a commission on ‘presidential capacity.’

If this is what Nancy Pelosi meant when she issued a warning to President Trump today: “By the way, tomorrow — come here tomorrow. We’re going to be talking about the 25th Amendment,” she said.

“But you take me back to my point, Mr. President, when was the last time you had a negative test before you tested positive? Why is the White House not telling the country that important fact about how this made a hotspot of the White House?” she added.

Speaker Nancy Pelosi (D-Calif.) will unveil a bill on Friday with Rep. Jamie Raskin (D-Md.), a constitutional law expert, that would create a commission to determine whether a president is fit for office amid concerns over President Trump becoming sick with COVID-19.

Pelosi’s office announced on Thursday that she and Raskin will formally introduce the bill at a news conference on Capitol Hill on Friday morning, hours after she hinted to reporters that “we’re going to be talking about the 25th Amendment.”

It’s expected to reflect legislation that Raskin originally introduced in 2017 that would establish a commission to determine presidential fitness for office as outlined by the Constitution’s 25h Amendment, which outlines presidential removal procedures.

The 25th Amendment states that the vice president and a majority of either the president’s Cabinet “or of such other body as Congress may by law provide” can declare that they believe a president cannot fulfill his or her official duties. Raskin’s original bill would have established said “body” to be made up of physicians, psychiatrists and former public officials like former presidents or Cabinet secretaries selected by congressional leadership.

Raskin told The Hill last Friday, hours after Trump announced that he had tested positive for COVID-19, that he would be updating his bill.

Pelosi says at her weekly press conference: "By the way, tomorrow — come here tomorrow. We're going to be talking about the 25th Amendment."

25th Amendment lays out succession if the president is incapacitated or deemed unable to carry out his duties https://t.co/Sk39EHPIL5 pic.twitter.com/qtnNc3NAD0

highlighted for your viewing pleasure pic.twitter.com/A6s6h1QnIg