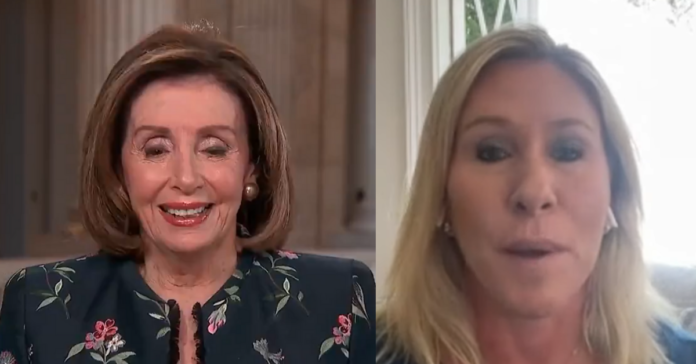 House Speaker Nancy Pelosi shot down a new Democratic plan to remove Republican Georgia Rep. Marjorie Taylor Greene from Congress. Pelosi said House leadership will not back the move ending the slim chance the Dems had.

California Democratic Rep. Jimmy Gomez introduced a resolution Friday to remove Greene saying she “advocated violence against our peers, the Speaker and our government.”

“I’m not gonna get into that,” Pelosi said. “Members are very unhappy about what happened here and they can express themselves the way they do. What Mr. Gomez did is his own view, and that is not a leadership position.”

“I believe some of my Republican colleagues, and one in particular, wish harm upon this legislative body. And I’m not saying this for shock value. It’s the conclusion I drew after a member of Congress advocated violence against our peers, the Speaker and our government,” Gomez said on the House floor Friday morning.

Gomez said he is taking this drastic action because Greene “had previously supported social media posts calling for political violence against the Speaker of the House, members of Congress, and former President Barack Obama.”

Gomez said he’s gotten support for his resolution from 72 Democrats as of Thursday afternoon but he will need a lot more to get her removed.

“Such advocacy for extremism and sedition not only demands her immediate expulsion from Congress, but it also merits strong and clear condemnation from all of her Republican colleagues,” Gomez said.

“Her very presence in office represents a direct threat against the elected officials and staff who serve our government.”

“There is nothing more threatening to Democrats than strong Republican women!” Greene said.

“Democrats are trying to overturn the will of the American people who voted for both myself and Congresswoman Miller-Meeks. This is a continuation of the House Democrats’ war on women.”

‘That Is Not Leadership Position’: Pelosi Refuses To Back Effort To Remove Marjorie Taylor Greene From House https://t.co/lnfzdNl8bG