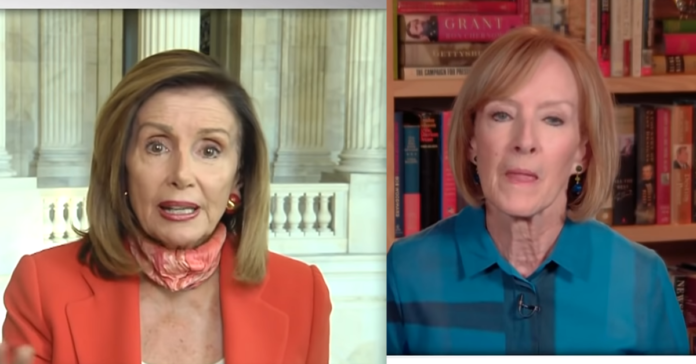 “Democrats want more money, Republicans want a lot less,” Ms. Woodruff said. “They are saying they’re willing to show flexibility, and they’re also saying a lot of the money that was passed in the spring, Madam Speaker, has not even been spent yet.” (watch video below)

Nancy grew visibly upset at the not even tough question and started shaking her head before she snapped at the veteran PBS reporter:

“No, I’m playing devil’s advocate here to ask you for your position,” Ms. Woodruff said.

“That’s not what the facts are. No, no you aren’t,” Pelosi responded.

“You know, I mean, the point is we have a bill that meets the needs of the American people. It’s called The Heroes Act. They have not even, they don’t even want to do state and local — and when they do it’s very meager.”

“Madam Speaker, the — I mean, with all due respect, you called it piecemeal, and yet what the Republicans were offering was a short-term extension that would have allowed these extra unemployment benefits to keep flowing,” Woodruff asked earlier in the interview, “Democrats said no.”

“Well, it would have been finished by now. Republicans didn’t have anything that they could pass in the Senate on their own side.

We have a bill. It’s called the Heroes Act. It passed 11 weeks ago tomorrow. It would have saved lives.”