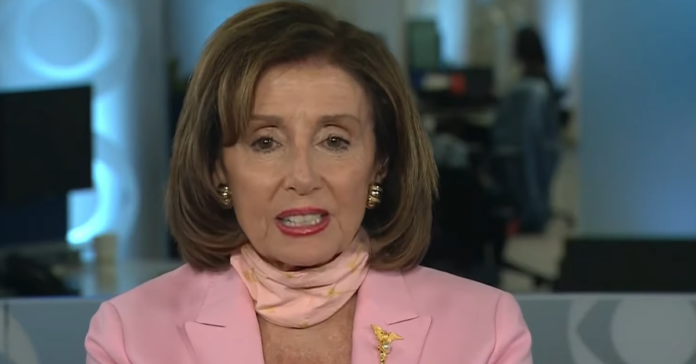 Nancy Pelosi went over to Europe to meet with G7 members and to make a speaking appearance at Cambridge University. Why she is in Europe when the border is a mess, Kabul is a debacle, and the debt limit has not been raised so we risk the first default in our history, is beyond comprehension.

But that is not she all she is avoiding. Biden’s agenda is stalled in Congress and looks like it will be DOA or severely watered down if it passes. And the scandal surrounding General Milley, the one that she played a part in, is still front page news.

Maybe she is there to try to ignore the crisis with what General Milley did or did not do in the last few days of Trump’s term, and her role in what happened.

We need answers and the Milley situation needs to be probed. There are a lot of things going on and it is shocking to see Pelosi taking a vacation to Europe in the middle of all the chaos.

But then she opened her mouth and made it worse. She trashed Trump supporters calling them a cult before trashing the GOP and former President Trump.

“It is a privilege to join my G7 colleagues in the United Kingdom to discuss a top priority for legislatures and governments across the world.

“How to balance security and openness, particularly in light of challenges from the coronavirus pandemic, cyberthreats and terrorism.

“Public access to the workings of government is a cornerstone of democracy, and it is therefore imperative that parliaments and legislatures remain as open and transparent to the public as possible.

“We need to hear from – and be accountable to – those we are privileged to represent, as we work to deliver results in their lives.

“I say to my Republican friends, and I do have some.

“Take back your party. You’re the grand ole party of America. You’ve done wonderful thinks for our country.

“You have now been hijacked by a cult that is just not good for our country. Take back your party.

“Don’t let it be dominated by those who want to suppress the vote because they do not have a positive message to win.

“They want to suppress the vote and that is how they would win.”

Speaker Nancy Pelosi says if Trump runs in 2024, “He’ll be the first president who was impeached twice and defeated twice.” pic.twitter.com/2YOp7dFDms

Speaker Nancy Pelosi’s message: "I say to my Republican friends, and I do have some: Take back your party. You're the Grand Old Party of America, you've done wonderful things for our country. You now have been hijacked by a cult …” pic.twitter.com/43dh5RFdB5

NFL Superstar QB: “I’m not part of this woke cancel culture that gets off on trying to silence people all the time”