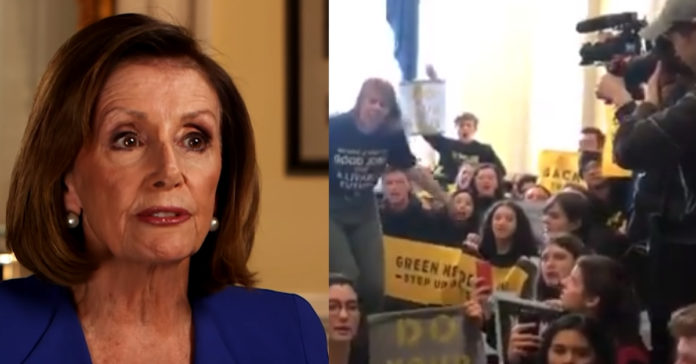 Nancy Pelosi is again trying to do the impossible – organize and lead the far left with a coherent strategy. It is a thankless job and one, like herding cats, that is doomed to fail.

The left has had their chances in the past but infighting, lack of discipline and just being wrong on many issues has put them on the bottom of the political layer cake.

They are dead last in influence and in power and their lack of cohesion will always doom them. The evangelical movement is an example of the opposite approach – focused, realistic, successful.

But that takes discipline which only comes from true belief and quite frankly the left’s beliefs change on a whim – leaving them spineless, waffling from one cause to another following whoever over the cliff like a pack of lemmings.

The group of more than 100 climate change activists, began flooding into Pelosi’s office around 10 a.m., demanding to speak with the congresswoman. The protesters were also demanding Democrats address climate change and a green new deal as part of taking the majority in 2019.

A protest group made up of hundreds of students crowded into a Capitol Hill office building and took over Nancy Pelosi’s office today. Roll Call reports more than 140 people were arrested including 61 near Pelosi’s office:

U.S. Capitol Police on Monday arrested roughly 143 activists, including 61 outside the office of the likely next speaker, California Rep. Nancy Pelosi. The mostly high school- and college-aged protesters demonstrated in or outside nearly 50 congressional offices to urge lawmakers to confront man-made climate change.

The protests were organized by the Sunrise Movement, a group that aims to promote policy action to address climate change and rid political campaign coffers of money from the fossil fuel industry…

Protesters at @NancyPelosi’s office demanding Democrats address climate change and a green new deal as part of taking the Majority next year – an effort @ocasio2018 pushing for. pic.twitter.com/M2ZajA9D2Q

BREAKING: a deployed 40 foot banner outside of @TeamPelosi’s office unfurls as police announce over megaphones that “this is an illegal demonstration.”

Where are our leaders? Right here. #GreenNewDeal pic.twitter.com/Z3HtwU0T44