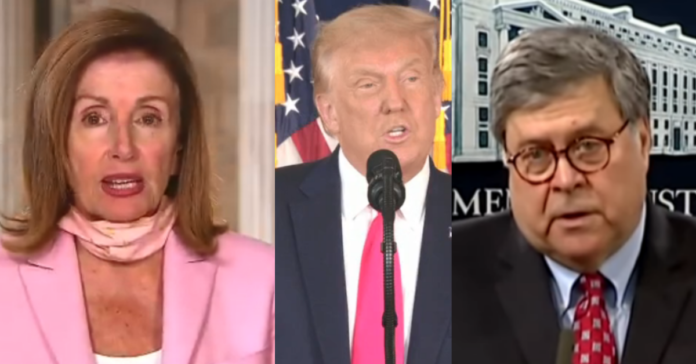 Nancy Pelosi rattled her saber over at the Trump administration in a blistering letter accusing them of messing with the 2020 Census Friday. But it is the insults Pelosi hurled at Bill and Barr and President Trump that has people disgusted.

Pelosi wrote to the Trump administration demanding information about the census: “Congress and the American people deserve answers on the reasons for this Administration’s sudden reversal on delaying Census operations during a pandemic to ensure the completeness and accuracy of the 2020 Census. We request that you produce to Congress all documents and communications referring or relating to the following no later than September 17, 2020:

Any discussions between the Commerce Department and Census Bureau since June 2020 regarding the schedule for completion of the 2020 Census, including all calendar invitations, meeting notes, written directives, or accounting of unwritten directives, as well as any justifications or analyses accompanying such discussions.

Any discussions regarding the schedule for completion of the 2020 Census between or among officials of the Census Bureau or the Commerce Department and other Administration officials, including the White House and the Office of Management and Budget.

The Census Bureau’s August 3, 2020 announcement that field operations will end on September 30th and data processing will end by December 31st, the decision-making that led to that announcement, any Census experts consulted in the decision-making process, and any internal analysis or modeling assessing changes to existing processes and risks to data accuracy resulting from changing the timeline to shorten field operations and data-processing operations.

Any consultations with Census Bureau experts regarding the decision to abruptly change the 2020 Census schedule to deliver apportionment data by December 31st, including any risk assessments or analyses prepared by career staff about this decision.

Risk assessments, analyses, and operational plan alternatives provided to agency leadership by career staff in order to complete the Census more rapidly and deliver apportionment data by December 31st, provided before and after the internal decision to revert to the December 31st date, including any analyses or warnings about decreased accuracy or increased risks in any part of the operations due to an accelerated schedule.”

When asked if Trump is engaged in voter suppression, Pelosi said,

“Yes, indeed. I think that’s exactly what his purpose is. It’s to say why should you vote, your vote will not be voted as cast.”

“It’s a tactic that must be ignored. Leader Schumer and I are writing to our colleagues about this very subject that again undermines the legitimacy of our elections, and it’s in Putin’s style, and Putin likes to discredit democracy, ours, or others around the world.”

“The president is being an accomplice in that and what he is saying.”

“In under 60 days we’ll have the election and have the results, and we want to have people know they can vote and not have to risk their health in order to cast their vote.”

“No matter what the president says about vote twice, everybody should know that’s wrong, and he has been told that.”

“Even though his attorney general again is a henchman of the president in that regard. It pains me to say that on a prayerful Sunday morning, but nonetheless, the facts must be faced.”

“I don’t know what Putin has on the president politically, personally or financially.”

“And that our own president should be an accomplice to that just raises so many questions.”