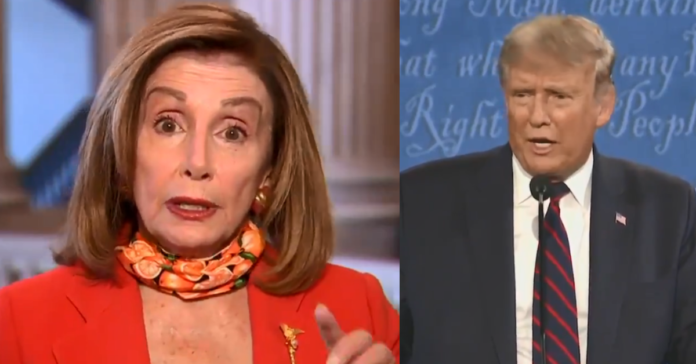 Pelosi is meeting with Mnuchin and it looks they have a deal – Pelosi does not get the money she wants but Mnuchin and Trump may allow a reserve fund to be used should the pandemic last longer than any funds they give out.

She also trashed Trump for his debate performance last night: “Actually he’s moved. In Charlottesville, we were disgusted when he said there are good people on both sides. This time he didn’t even grant that to the other side. This was a very sad occasion.”

Then Pelosi came clean and praised the GOP while taking her shot at Trump:

“The country needs a strong Republican Party…it’s done so much for our country…it’s been hijacked and is now “a cult.”

“Get us a Grand Ole Party again,” she added.

.@SpeakerPelosi on @Morning_Joe: The country needs a strong Republican Party…it's done so much for our country…it's been hijacked and is now "a cult"

As House lawmakers began moving forward on a new $2.2 trillion Democratic coronavirus stimulus bill, Mnuchin said he thought that he and Pelosi could “reach a reasonable compromise” and would know in the next day or two whether they had an “overall understanding.”

“We’re both making a good faith effort to try to get this done. And I think we want to figure out whether we can get it done, and if not, move on,” the Treasury secretary told a CNBC investor conference.

Mnuchin said he would pursue negotiations after the Nov. 3 election if no deal is reached ahead of it.

In a separate interview with MSNBC, Pelosi said: “I’m hopeful. We’ll just see what they come back with today and how our negotiations go next.”

She and Mnuchin spoke for about 50 minutes on Tuesday. It was not clear when the two would speak on Wednesday.

The House Rules Committee is debating an updated Heroes Act coronavirus relief package, which House Democrats unveiled on Monday. The panel would set the parameters for a House floor debate and vote on passage, but much depended on the outcome of Pelosi’s conversation with Mnuchin.

“It’s a negotiation. We won’t get everything we want,” Pelosi said.