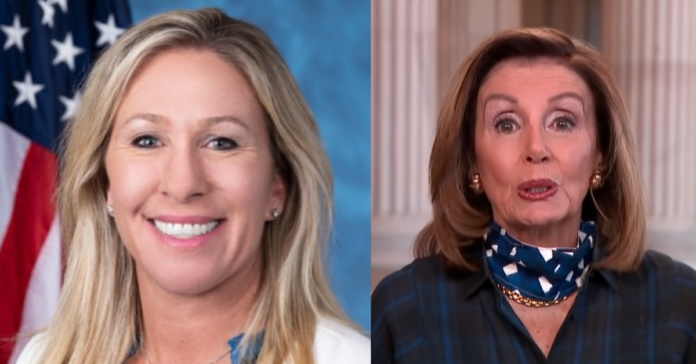 U.S. House Rep Marjorie Taylor Greene (R-GA) made her move to checkmate the Dems in The House as they reintroduce the “Equality Act.” She filed three amendments to the legislation to protect girls and churches and believers and she will dare the Dems to vote them down.

“In 2021, every American should be treated with respect and dignity,” said Dem Rep. Cicilline as he moved to reintroduce the bill. “Yet, in most states, LGBTQ people can be discriminated against because of who they are, or who they love. It is past time for that to change.”

Sen. Jeff Merkley (D-OR) will work with him in the Senate but they do not have 60 votes and they may not even get it to pass the House thanks to MTG.

In addition to enacting the Equality Act, Biden will take action using his executive authority. He will immediately reverse the discriminatory actions of the Trump-Pence Administration and then go further to end discrimination against LGBTQ+ individuals. Biden will:

Empower federal agencies to be champions for equality. Biden will nominate and appoint federal officials and judges who represent the diversity of the American people, including LGBTQ+ people. He will ensure that leaders across the federal agencies are committed to fully enforcing our civil rights laws for LGBTQ+ individuals.

Protect LGBTQ+ individuals from employment discrimination based on sexual orientation and gender identity.

Support transgender and non-binary people in the workforce. Transgender and non-binary Americans face significant discrimination when seeking employment. To address these unique challenges, Biden will ensure that workforce and entrepreneurial training programs and resources funded by the U.S. Department of Labor and the Small Business Administration focus on and benefit this community.

He will also provide incentives for states and local governments to adopt programs that help prepare transgender and non-binary people for the workforce and encourage entrepreneurship.

The Biden Administration will also work with civil rights leaders to develop and institute implicit bias training programs for federal workers and contractors to address discrimination based on race, sex, sexual orientation, gender identity or expression, or disability. A Biden Administration will make the resulting training materials available to the public so other employers can conduct similar programs.