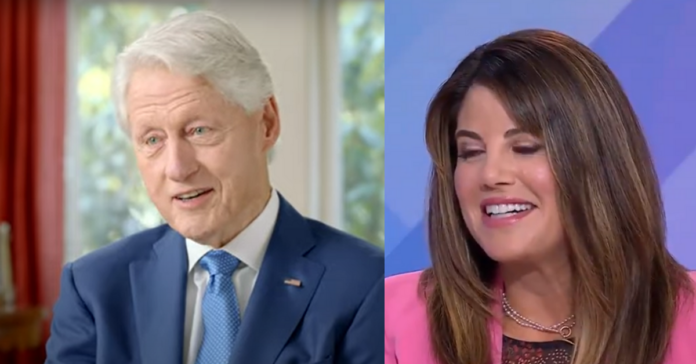 Monica Lewinsky dropped the hammer on former President Clinton and former first lady Hillary saying Bill “should want to apologize” for his part in the 1990s scandal that ruined her life and led to his impeachment.

“I think there was a long period before my life changed in the last six or seven years, where I felt a lot in terms of there not being this resolution. And I’m very grateful that I don’t have that feeling anymore,” Lewinsky said,

“As a producer, I’m very proud,” Lewinsky said of the new show about the scandal she produced for F/X. “As a subject, I’m nervous. I’m nervous for people to see some of the worst moments of my life.”

“It is a dramatization, but there is an enormous amount of emotional truth,” she said.

“I think a lot of people know about the story, but people are going to be very surprised when they watch it of things that they didn’t know happened,” Lewinsky said.

“There were so many margin notes I had in the scripts of like, ‘Did this really happen?’ So even I learned things,” she said.

However, she noted that “he should want to apologize” in the same way that anyone who hurts another person through their words or actions should want to make amends.

Lewinsky concluded her thoughts on the scandal by noting that she believes, if the same scandal happened today in the age of social media, cancel culture and in a post-MeToo-awareness society, things would be different. However, she noted that it might not necessarily have been better for her.

“It’s not just people in power who have voices,” she explained. “That’s one of the beauties and the beasts of social media. More people can be heard, so I might have had a little more support.”

Lewinsky continued by saying that while her reputation was thrown to the wolves in 1998, the things that people believe would help her out today are also places where our society is “drowning in shame,” which she plans to tackle in her upcoming documentary about public shaming. However, she’s currently focused on the premiere of “Impeachment: American Crime Story.”

Do you feel Bill Clinton owes you an apology after all these years? –@SavannahGuthrie to Monica Lewinsky pic.twitter.com/fZ3Fq7Zkur