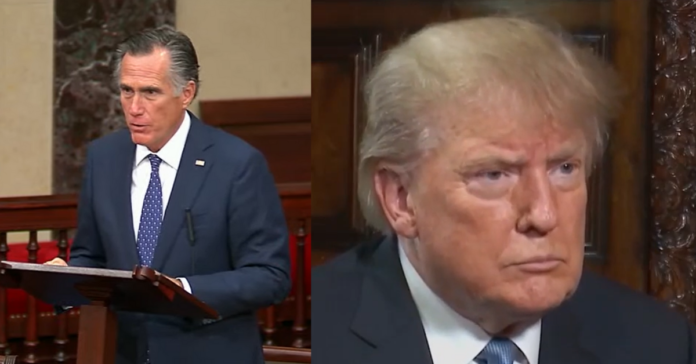 GOP Senator issued a warning from the Senate floor to all the Democrats across the country who are pushing to end the filibuster reminding them Trump could easily win again in 2024 and they will regret it if the filibuster is gone.

Mitt said: “The United States Senate is one of our vital democratic institutions, and the power given to the minority in the Senate and the resulting requirement for political consensus are among the Senate’s defining features.

“There is also a reasonable chance Republicans will win both houses in Congress, and that Donald Trump himself could once again be elected president in 2024.

“Have Democrats thought what it would mean for them — for the Democrat minority — to have no power whatsoever?”

Mitch McConnell said: “Look, I’ve known, liked and personally respected Joe Biden for many years. I did not recognize the man at the podium yesterday.

“The president’s rant, rant, yesterday was incoherent, incorrect and beneath his office.

“Yesterday, with the world’s largest megaphone, he invoked the literal Civil War and said we are on the doorstep of autocracy.

“Talked about domestic enemies. Rhetoric unbecoming of a president of the United States.

“President Biden has chosen to fail his own test,” Mitch said.

“I believe the threat to our democracy is so grave that we must find a way to pass these voting rights bills,” Biden said in Atlanta yesterday. “And if that bare minimum is blocked, we have no option but to change the Senate rules, including getting rid of the filibuster for this.”

McConnell’s remarks come a day after Biden traveled to Georgia to make a high-profile case for Senate Democrats changing the legislative filibuster, which requires 60 votes for most legislation to advance, in order to pass election and voting legislation. Republicans have blocked three such bills over the past year.

Biden, as part of his speech, framed the fight over voting rights as a matter of historical significance, suggesting lawmakers must decide whether they want to “be on the side of Abraham Lincoln or Jefferson Davis,” referencing the former U.S. president and the president of the Confederacy, respectively.