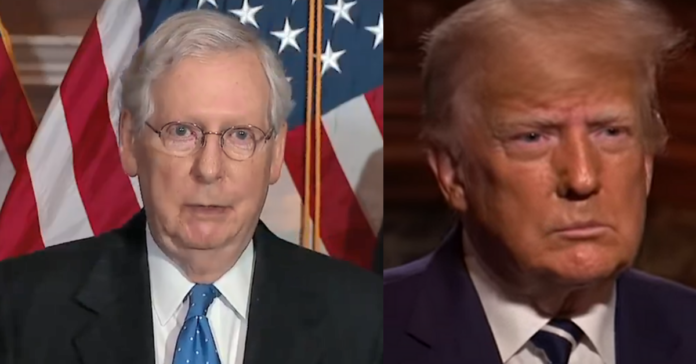 Senate Minority Leader Mitch McConnell (R-Ky.) responded to former President Donald Trump with a snub today saying Trump is the past and Mitch looking to the future. Trump called for new leadership in the GOP in an interview earlier today.

“I think we’re going to do very well. We need good leadership. Mitch McConnell has not done a great job, I think they should change Mitch McConnell,” Trump said during a Fox interview with Maria Bartiromo today.

Mitch McConnell has tried to stay out of a war of words with Trump as they have feuded but today he broke his silence and took a swipe at Trump: “Well look, we’re looking to the future, not the past. And if you want to see the future of the Republican Party watch Tim Scott’s response to President Biden last night,” McConnell said.

“He’s the future. That’s where we’re headed. We’re not preoccupied with the past but looking forward,” Mitch added however Trump and a majority of the base would disagree with Mitch.

“I’m looking at the right people to endorse and when I endorse people it means a lot,” Trump said of 2022.

“I’m working in conjunction with Kevin McCarthy and the group and I think we’re going to take back the House,” he said.

Trump also weighed in on the feds raiding Rudy.

Former President Trump slammed the raid by federal agents on Rudy Giuliani’s apartment, saying in an interview early Thursday that it was “very unfair.”

“Rudy Giuliani is a great patriot. He just loves this country, and they raid his apartment,” Trump told Fox Business host Maria Bartiromo on “Mornings with Maria,” referring to his former personal attorney.

“It’s like so unfair and … it’s like a double standard like I don’t think anybody’s ever seen before,” he continued. “It’s very, very unfair. Rudy is a patriot who loves this country.”

The development comes as authorities investigate whether the former New York mayor illegally lobbied the Trump administration on behalf of Ukrainian oligarchs.

“I don’t know what they’re looking for or what they’re doing,” the former president said early Thursday. “They say it had to do with filings of various papers and lobbying files. Well, did Hunter file?

“We’re looking to the future, not the past.” pic.twitter.com/M0zWMIjOY6