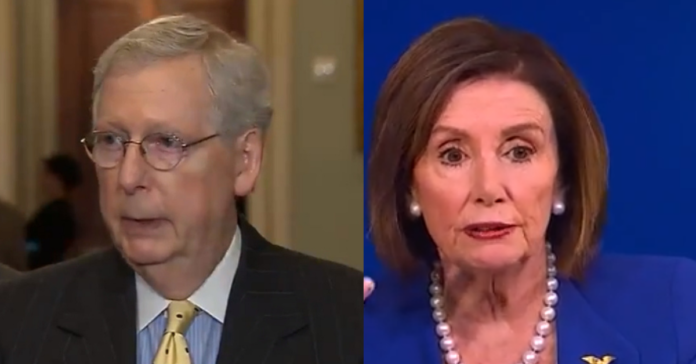 Nancy Pelosi tried to pull a fast one but Mitch McConnell stopped her dead in her tracks. The crisis at the border demands immediate attention from Congress.

So both Houses took up separate bills. The GOP’s passed the Senate with a bipartisan majority 84-8 vote.

The House bill was by party lines. In other words, Pelosi will lose this fight so she needs to vote on the GOP’s bill now.

“It’s not going to happen,” the Kentucky Republican announced on the Senate floor Thursday.

The new House bill would eliminate funding in the Senate bill allocated for the use of the military to help secure the border and it strips out additional funding for Immigration and Customs Enforcement, otherwise known as ICE, which is an interior immigration enforcement agency Democrats want to eliminate.

“If House Democrats send the Senate some partisan effort to disrupt our bipartisan progress, we will simply move to table it,” McConnell said on the Senate floor.

“The United States Senate is not going to pass a border funding bill that cuts the money for ICE and the Department of Defense.”

The Senate passed a $4.6 billion bipartisan border funding bill in an 84-8 vote on Wednesday, which increased pressure on Pelosi to take up that bill.

Pelosi on Thursday called for the Trump administration and the Senate to engage in an immediate conference to do the best we can for the children before we leave for the 4th of July.”

McConnell urged Pelosi to take up the Senate bill. He said some of the additional funding in the House bill “may be unobjectionable things the Trump administration may be able to help secure for them administratively.”

But McConnell flat-out rejected the cuts to military and ICE proposed in the latest House version.

McConnell said the Senate-passed bill “is the only game in town,” and urged House Democrats “to quit playing games,” and pass the Senate bill.