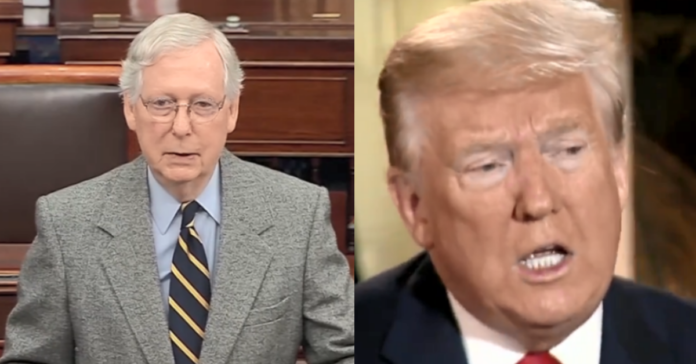 President Trump wants a big stimulus for middle America after wall Street got a blank check and he wants it right before the election.

Trump is right as the earlier stimulus was a short-term deal to keep the economy afloat. Now Trump wants to solidify his next four years with one last big stimulus bill because he knows voters would love to get a nice $1,200 check right before they pull the lever.

But Mitch is saying no. Mitch, after all the deficits under Bush and in Trump’s first three years, is all of a sudden worried about the debt?

“Actually no,” McConnell said while laughing about Trump’s proposal, “He’s talking about a much larger amount than I can sell to my members.”

Mitch wants $500 billion and not a penny more while Trump and Pelosi want at least $1.8 trillion.

Senate Majority Leader Mitch McConnell (R-Ky.) on Thursday shot down the prospect of a coronavirus deal totaling between $1.8 trillion and $2.2 trillion — the goalposts of the current talks between Democrats and the White House.

McConnell’s comments, made to reporters in Kentucky, underscore the divisions between President Trump and Senate Republicans on a fifth coronavirus package, with the GOP leader preparing to force a vote on a $500 billion bill next week.

“I don’t think so. That’s where the administration is willing to go. My members think half a trillion dollars, highly targeted, is the best way to go,” McConnell said, asked about the prospect of a deal totally between $1.8 trillion and $2.2 trillion.

McConnell added that while a reporter was correct that there are negotiations ongoing between Speaker Nancy Pelosi (D-Calif.) and the White House about the higher price range, “that’s not what I’m going to put on the floor.”

McConnell’s comments come as President Trump signaled on Thursday that he was willing to go higher than $1.8 trillion in negotiations with Democrats.

But McConnell is set to put a substantially smaller bill on the floor next week.

>@senatemajldr chimes in and says eh I’ll stick to 500bn and no way he’d put a bigger bill on the floor. pic.twitter.com/tgW6mFFac2

"Actually no," McConnell says with a chuckle, when asked if his bill is similar to what the president is proposing. "He's talking about a much larger amount than I can sell to my members."